A powerhouse of Womens Football since the age of 16 when she first pulled on the jumper for Victoria in a Senior Representative game, which culminated in All Australian selection, there is so much that Moana has achieved in her football career to date.

With footy in her blood, a passion she shared with her late father, Gary, Moana has always loved playing AFL. However this didn't always continue to be the case during her early twenties when she took a few years break from the game before rediscovering the love in 2014 after seeing the changing landscape of Women's Football in Australia.

With Women's Football participation at an all time high since the announcement and inaugural AFLW season, Moana took her goal kicking prowess from suburban grounds to the big stage, representing the biggest sporting club in Australia, Collingwood.

Since the AFL Women's Exhibition Game in September 2016 where Moana starred for the Western Bulldogs in there win against Melbourne, kicking 6 goals, the interest in Moana and her journey has been amazing. Especially as this game featured less than a week after the episode of Australian Story which focused on the lives Moana and Susan Alberti, which many football and non football followers were drawn too. This has resulted in Moana speaking at quite a number of functions, plus signing sponsorship agreements with company's such as NIKE, Gameday Mouthguard's, Special K, Melbourne City Mission, and the Herald Sun. In addition to this, Moana released her own biography 'My Way' on Mothers Day, plus she has been the face of various campaigns including Harness Racing Victoria, Star Wars, and Myer. Whilst her life has changed, and people now stop her in the street to have a chat and wish her luck, her love for her family and football will always continue to be most important to her.

After two AFLW seasons with Collingwood, Moana was approached by North Melbourne to join their inaugural team for the 2019 Season. It was a difficult decision due to how much Moana had invested at Collingwood, however after much deliberation she decided to take the opportunity and move to Arden Street in what has been a very busy off season for her. This included featuring on Channel 10's 'Survivor' in the 'Champions vs Contenders' series which saw a number of high profile Australian athletes and leading identities from their respective fields fight to become the sole Survivor. Unfortunately Moana's journey on the Island was cut short due to a debilitating illness, however she puts it down as one of her best life experiences to date.

An Operations Manager for a Traffic Control Company, it is common for Moana's day to start at 4am in order for her to fit in her training, playing, work, and family commitments which she is devoted too. 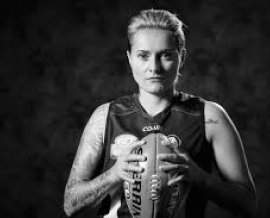