Former champion Essendon footballer Michael Long has forged a deserved reputation as one of the most influential and enduring Aboriginal figures.

He is a proud Anmatyerre, Maranunggu and Tiwi Aboriginal man.

Michael's father and mother were part of the stolen generation; taken as infants from near Ti Tree and Daly River, respectively, to the Tiwi Islands, where Michael was later born and raised.

He has dedicated his life to advancing the Aboriginal and Torres Strait Islander cause and was the 2018 Northern Territorian of the Year, in recognition of his significant contributions.

Darwin-based facility, the Michael Long Learning and Leadership Centre (MLLLC), officially opened in 2015 to provide indigenous youth with the same opportunities as all Australians, is named in his honour.

This journey also inspired the Long Walk Trust, a charity that promotes indigenous cultural awareness through The Long Walk and related programs.

The Long Walk to Dreamtime at the 'G has become Australia's largest reconciliation event, with up to 14,000 people taking part each year.

Long's legacy derived from his illustrious football career for the Essendon Football Club, which saw him win premierships in 1993 and 2000, including accepting the Norm Smith Medal from fellow Tiwi Islander Maurice Rioli after the first of them, and earn All-Australian selection in 1995.

However, Long's best-known football feat was the history-altering stand he made against racism after an on-field incident in the Bombers' inaugural Anzac Day clash with Collingwood in 1995.

The AFL subsequently introduced its groundbreaking racial vilification policy in 1995, which many other sporting codes, both in Australia and beyond, went on to adopt.

Essendon immortalised Long with a poignant statue at the entrance of the football club's Tullamarine headquarters in 2018.

Long is portrayed holding a walking stick and wearing the Bombers' trademark red sash, with his No.13 playing number on his back. 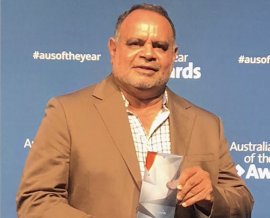