A successful publican and hotelier

With vast football knowledge and a sharp sense of humour, Ricciuto shines in his role as co-host of Triple M Adelaide’s drive program, The Rush Hour. Along with providing special comments for  Triple M Football, in 2011, Ricciuto joined the all-star line-up of the Fox Footy commentary team. Completing his presence across all forms of media, Ricciuto continues to write weekly columns for the Adelaide Advertiser and the Betfair Australia website during the AFL season.

Debuting for the Crows as a 17-year old, Ricciuto quickly became a household name in South Australia. His reputation was confirmed with All- Australian honours in 1994, his second year in the AFL. Ricciuto would go on to achieve the honour an amazing eight times, captaining the side twice.

In 1998, Ricciuto was a key member of Adelaide’s back-to-back premiership side, winning his first club best and fairest. The year was also marked with selection in the Australian International Rules team to take on Ireland. 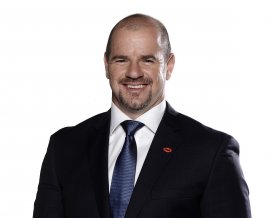