Kim Brennan (nee Crow) is an Olympic gold, silver and bronze medallist, lawyer, technology consultant and Deputy Chef de Mission for the Australian Team at the 2020 Olympic Games in Tokyo.

Kim commenced her elite sporting career as a track and field athlete. She finished second at the World Youth Championships before injury forced her to give up on Olympic Athletics aspirations in athletics. Not to be thwarted, Kim took up rowing in 2005 and hasn’t looked back.

She made her first Australian team within 8 months of starting rowing, and won a bronze medal in the women’s eight at the World Championships that year. At the London Games, Kim made history when she competed in two separate Rowing events at the Olympics. Partnered with Brooke Pratley, the duo brought home a silver medal in the women’s double sculls, before Kim went on to claim a bronze in the single sculls. Kim married 2008 rowing gold medallist, Scott Brennan, in Hobart in 2015.

When not training and competing Kim keeps busy…. She chaired the Australian Olympic Committee Athletes’ Commission from 2012-16 and completed the Australian Institute of Company Directors course in September 2015.

She is an Ambassador for the Alcohol and Drug Foundation’s Good Sports program, the Reach for Nepal Foundation and the Kafue River and Rowing Partnership with the WWF. Currently Kim works as a management consultant for EY across performance ethics, technology transformation, culture and emerging technology. She was recently named one of the Australian Financial Review’s Top 100 Women of Influence.

Kim is available to MC your events, speak on leadership, teamwork and resilience and also presents jointly with her husband, Olympic gold medallist and doctor Scott Brennan. Kim is an outstanding keynote speaker, at ease with the media and the ultimate role model. 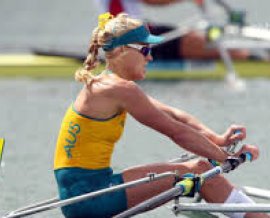