Holding an extensive career in AFL, Jonathan Brown is a well-known sporting hero and now media personality. His professionalism and dedication seen on the football field is transferred to his speaking roles, making him highly sought after by many companies for a variety of events.

Growing up in Warrnambool as the son of a former Fitzroy player, Jonathan was destined for a sporting career. He was a Victorian Country representative at Under 16 and Under 18 levels and was drafted as a Father-Son selection by the Lions in 1999.

In 2000, he made his debut against the Adelaide Crows playing in the finals within his first year with the Lions. A year later, Jonathan became an AFL Premiership player, securing his first history making win with the club.

2002 brought him a second Premiership medal before playing in the 2003 preliminary final, ultimately securing a third Premiership title for the Lions. Jonathan’s dominant and impressive playing skills cemented his place as one of the game’s dominant forces.

Over the course of 2005-2006, injury and suspension ruled him out of playing but Jonathan didn’t allow it to hold him back.

In 2013, he captained the Lions to the NAB Cup, kicking five goals himself.

Not only achieving enormous success on the field, Jonathan’s sportsmanship and positive relationship with his peers has seen him win both the AFLPA Best Captain and Most Courageous Player awards on several occasions.

Jonathan is the proud father of Olivia, Jack and Macy with his wife of nine years, Kylie.

He retired in 2014 but remains an AFL legend and icon, releasing an autobiography titled ‘Life & Football’ in 2015.

After retiring, Brown moved into the media side of the sport, frequenting Fox Footy’s AFL coverage, becoming a member of Monday Night program ‘On the Couch’ and writing regularly for the Herald Sun.

In 2016, Jonathan joined Chrissie Swan and Sam Pang, co-hosting their own breakfast radio show on Nova 100.

Jonathan Brown’s extensive and successful career both on field and off, demonstrates his dedication and commitment. He is influential speaker who is sure to impress and entertain his audience, regardless of the event. 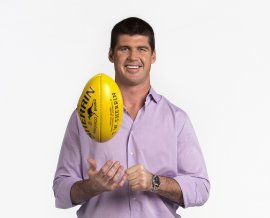