Jimmy is one of the most decorated AFL players of the modern era. Having played over 280 games for the Geelong Football club he has won three premierships, a Brownlow Medal, a Norm Smith Medal and twice been named All Australian.

Jimmy was drafted to the Geelong Football Club from the Geelong Falcons U18 at number eight in the 2001 National Draft, going on to be nominated for the NAB Rising Star award in his first year. Since then Jimmy has established himself as one of the true stars of the AFL. He is renowned for his unique ability to play in a number of positions on the ground, and it is not uncommon for the mercurial Jimmy to play midfield, forward and back all in the one game.

A courageous and relentless competitor, Jimmy has the uncanny knack for dominating the big games. For his stature, Jimmy is an exceptional overhead mark and has become famous for his love of wet conditions.

Jimmy cemented himself as one of the AFL’s elite midfielders in 2006 and in 2007, went on to be awarded the AFL’s highest honour, the Brownlow Medal. Just days later Jimmy played a key part in his team’s Grand Final win, Geelong’s first premiership since 1963. Over the next five years both Jimmy and Geelong FC enjoyed tremendous success, with Geelong winning another two premierships (2009 & 2011) and Jimmy being awarded the 2011 Norm Smith Medal.

Being one of the AFL’s most popular and insightful players, Jimmy is highly sought after for media opportunities on shows including The Footy Show (Ch 9) and Game Day (Ch 7). He has written for leading newspapers including The Age, The Herald Sun and Geelong Advertiser.

His athletic abilities, good looks and natural charm have seen Jimmy become the face of L’Oreal Men Expert and ambassador for a suite of premium brands including Essendon Ford and historically Adidas. He has also appeared in campaigns for Witchery Man, The Iconic, Brando Shoes and Shoreditch.

Jimmy also keeps himself busy off the field studying a business degree. Jimmy has completed an Executive Management course through the AFL and also works part-time as an associate for a consulting firm. In 2014, Jimmy was also elected to the AFLPA board.

In 2016, Jimmy proudly launched his Face Up To Domestic Violence campaign in support of the Luke Batty Foundation and Bethany. His violent childhood fueled his desire to stop domestic abuse and for the entire 2016 AFL season he will forgo cutting his hair and beard to raise awareness and funds for the two organisations. Beyond this, he is a passionate ambassador for children’s charities Challenge-Kids with Cancer and Cottage by the Sea, as well as taking a keen interest in philanthropy, working closely with Red Dust Role Models in Australia and India. 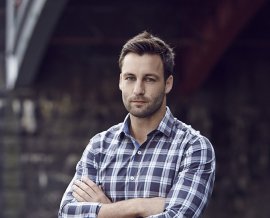