Having returned from a decade’s long hiatus just over a year out from the Rio 2016 Paralympic Games, Heath Davidson proved that he had what it took to become one of the best wheelchair tennis players in the world when he and quad doubles partner Dylan Alcott combined to win the 2016 International Tennis Federation World Team Cup in Tokyo, Japan.

Not only was it a history-making moment for Australian wheelchair tennis, but it gave Heath his first taste of international success and the motivation he needed to push towards Rio.

In Rio, Heath and Dylan were dynamic. They began their quad doubles campaign with a commanding 1-4, 4-6 win over Shota Kawano and Mitsuteru Moroishi (JPN), and ended it with a brilliant come-from-behind win over reigning Paralympic champs Nick Taylor and David Wagner (USA) to take gold. In recognition of their incredible feat, Heath and Dylan were named joint winners of Tennis Australia’s Most Oustanding Athlete with a Disability award.

Since making his Paralympic debut, Heath has improved out of sight. He won his first international quad singles title in May 2017, and his first of two Australian Open quad doubles titles in 2018. He is the highest ranked Australian in the quad doubles (world No. 2) and sits just outside the top five in the singles.

At this rate, Heath will not only be the odds-on favourite to defend his doubles crown at the Tokyo 2020 Paralympic Games, but also be in strong contention to win a medal of his own, as he looks to improve on his quarter-finals exit from the 2016 Paralympics. 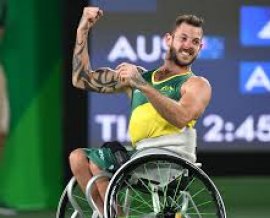