Greg Ritchie, affectionately known as ‘Fat Cat’, shows impeccable timing in not only his sporting career but also speaking career. He is a cricketer who uses his past experiences to relate with his audiences, regardless of the diversity.

In 1982, Ritchie began his professional cricket career for Australia in Pakistan, being the only Australian player to score three centuries in the series. Three months later, he was dropped from the team for the Ashes series against England.

Re-joining the Ashes in 1985, Greg went on to play 30 tests, scoring a total of 1690 runs including three centuries and seven half-centuries. A year later, he retired and moved into the media side of the sport, including joining the Channel 9 commentary team and Triple M Brisbane’s breakfast show.

As recognition of his triumphant career, in 2000, Greg was named as one of the seven greatest Sheffield Shield run scorers in Queensland’s history, including the accumulation of over 6000 runs in his ten-year career.

As an internationally recognised cricketer, Greg Ritchie utilises his extensive cricket knowledge and professional speaking background to interact with his audiences. He has hosted a multitude of events including award ceremonies and after-dinner speaking engagements both nationally and internationally. He inspires and entertains audiences to ensure that his presentations are remembered far after they conclude. 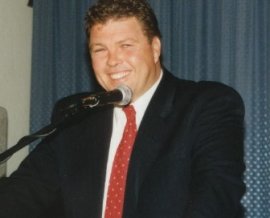