Greg (Marto) Martin has done it all.  He has been a football superstar, a sports commentator, a builder, a cabbie and is generally known as a “good bloke”.

Martin, though, is perhaps best known for his Rugby career.  He has had a stellar career that spanned over eighteen years in the game he loved.  He played for his beloved Queensland, competed internationally in 9 tests for Australia and even made a guest appearance for Clontarf – a Dublin club side.

Greg continues his career as a commentator with Fox Sports and appears regularly as a panellist on Inside Rugby. Marto is also a part of Triple M’s breakfast show ‘The Cage’ a great avenue for his quick wit and strong sports brain.   As a speaker Martin tells his story and motivates people with his sense of humour and his passion for the game.  Greg continues to champion the game he loves by providing coaching to school and club sides as well as supporting superstars of the league. 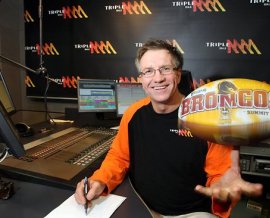