He is also known as an AFL Legend and Brownlow Medallist, playing with both Essendon and Port Adelaide. Gavin’s football career spanned 300 senior games, winning two premierships and countless awards during his career. He earnt a reputation as one of the best players to ever play the game.

Growing up, he spent time with his great grandfather Dick Davey, who was a well-respected leader of both the people of the Kooniba Mission and the community. They shared a love of colour and storytelling using art.

Whilst in his twenties, Gavin made the life changing decision to start painting. A conversation with his Aboriginal teammates started a competition to produce the best piece of art from their regions.

Exploring and discovering his ancestral links through canvas saw Gavin recreate memories and capture moments that were breath-taking.

In May 2016, he released his first solo exhibition titled ‘Shooting Star’. The name and inspiration came from camping with his wife on Wardang Island and saw a shooting star. He felt a need to express it on canvas and felt a connection his ancestors. Since producing the painting, Gavin discovered that the Kokatha people have a strong connection to the night sky and stories in the stars.

In November of the same year, Gavin held his second solo exhibition presented by the Willunga Gallery. It was held at Hardy’s Tintara in McLaren Vale SA with the support of Arts South Australia.

With the support and mentorship of Aboriginal relatives and friends, Gavin Wanganeen’s exceptional talent has flourished with his work receiving critical acclaim and national attention. 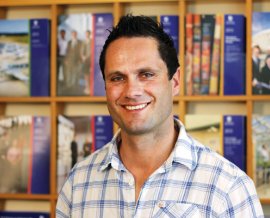