One of the greatest ever Kayaking Champions

After competing around the World for 2 1⁄2 decades, Clint Robinson has achieved a large amount in his career. He is in a unique position by being an Olympic Champion in the K1 1000m + World Champion in 5 different paddle sports (sprint kayaking, SLS spec ski, ocean ski, SLS board and 6 man outrigger), which is unmatched around the world.

At just 20 years of age Clint Robinson achieved what most athletes strive for their entire life, an Olympic Gold Medal.  The K1 1000m Kayak race at the Barcelona Olympics left Australians on the edge of their seats and gave birth to a National Hero.  A Queensland country boy with a dream who proved commitment and dedication could make reality and give his career a whole new meaning.

Clint was officially recognised for his sporting achievements and status as a champion Australian by being awarded an O.A.M of which he is justifiably proud.

Clint grew up in country Queensland just outside Maroochydore and still chooses to live on the Sunshine Coast.  With his father as his primary coach, Clint’s sporting life was very much a family affair.  The Robinson family realised Clint’s athletic ability at an early age when at the age of 12 he represented Queensland in both Rugby League and Surf Lifesaving.  It was at this tender age that Clint’s dream of an Olympic Gold became clear even though he did not know at that point which sport he would represent.  A short time later Clint’s Rugby League career ended to focus on Surf Lifesaving.

Surf Lifesaving has provided Clint with many highlights throughout the years. In 1999, he eclipsed Ironman legend Trevor Hendy’s record & became the nation’s most successful Lifesaver.  He was also awarded he Peter Lacey memorial award for the most outstanding competitor of the Championships.  In 2008 he took his career tally to 36 National Gold medals which continue to grow.  He has also been honored with the captaincy of many Australian Surf Lifesaving Teams, which have contested the World Championships, Tri-Nations Series, and the Goodwill Games, which have all, won convincingly.  Also complimenting these achievements are his 2 World Surf Tittles and 2 Ocean Ski World Titles.

Kayaking is Clint’s greatest love and can be seen by the incredible results he has achieved in winning 3 Olympic Medals and a World Title, while representing Australia at the last 5 Olympic Games, which are complimented by a staggering 32 Australian Championship Gold medals to date.

To earn his birth as Australia’s greatest ever Kayaking Champion as he is known today, Clint collected a World Sprint Canoe Championship title in 1994, a Bronze medal at the 1996 Atlanta Olympics and a Silver medal in the 2004 Athen’s Olympic Games. The list of his state, national and international achievements surrounding these titles is endless as his dedication and commitment to his country and his love for his sport.

Clint is ambitious and sees no path to success other than through extreme hard work and commitment. He has an intense love of his country and a passion for success. This passion gives him the ability to captivate any audience and his achievements in kayaking and his dedication to all he undertakes, have proven to be an inspiration to all that know him. 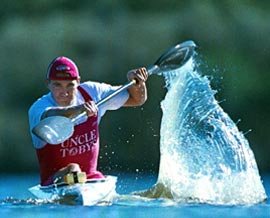