Chloë McCardel is an international speaker, leadership and corporate workshop facilitator, World Record holding marathon swimmer, coach and ambassador. She is passionate about inspiring and empowering people to achieve extraordinary results in their own lives. Chloë has a Bachelor of Arts (Sociology), is undertaking an EMBA and has coached over 150 people to swim the English Channel.

Chloë is pushing the boundaries of marathon swimming and what the human mind and body can achieve. Described as the greatest ultra-marathon swimmer in history, an inspiration and role model, Chloë aims to achieve the impossible.

She has swum the notoriously difficult English Channel, 31 times. Including 21x single crossings (34km each), 3x double non-stop crossings (68km each) and a triple non-stop crossing in 2015 (102km), the first triple crossing in 25 years. In 2016 Chloë crossed the English Channel eight times, breaking the World Record for completed crossings in one season. In 2014, Chloë set the World Record for the longest ratified unassisted ocean swim of 124.4km in 41.5 hours (completed in the Bahamas).

In 2016, Chloë was inducted into the International Marathon Swimming Hall of Fame as its youngest member, and awarded the prestigious ‘Poseidon Award’. Chloë was awarded the 2014 and 2015 Marathon Swimmers Federation ‘Solo Swim of the Year (Female)’. The Channel Swimming Association has awarded Chloë 24 awards and plates for her English Channel achievements.

As well as being a World Record holding marathon swimmer, Chloë has, like many women around the world, experienced domestic violence by more than one partner in her lifetime. She has been diagnosed with Post Traumatic Stress Disorder and Anxiety due to these experiences and is now an advocate for women’s mental health and ending domestic violence. Chloë has supported organizations like ‘White Ribbon Australia’ and ‘Free To Run’ that help women suffering from emotional trauma to combat violence against women and reduce domestic violence. Her lessons in surviving the physical and mental challenges of long-distance, open water swimming are an inspiration to others coping with their own battles and life struggles.

2XU: Human Performance Multiplied
Learn the easily transferable mental skills Chloë employs during training, preparation and her marathon swims which have and continue to set her on course for world class success. Chloë clearly demonstrates how these can be adapted and used in your personal and professional life to lift your results to new heights.
Beyond Your Limits: Achieve extraordinary results
Chloë reveals her personal insights into how she works, in practice, to achieve Extraordinary Results from both a big picture and day to day perspective. She shares with you how you too can create these Extraordinary Results in your personal and professional life. Topics include purpose, vision, goal setting, excellence, environment, feedback and more.
Creating Team Synergy for Outstanding Results
Chloë has created, on very small budgets, numerous teams from around the world to support her marathon swims and support many of the 150 swimmers she has coached to swim the English Channel. She shares how she integrates cutting edge leadership theories into her leadership style to enrol and select team members who not only work well together but who also create synergy. Synergy is the concept of the whole being greater than the sum of its parts. In teams it is where individuals working effectively together, create a result which is over and beyond what is possible individually.
Resilience and Endurance
Chloë shares her deeply personal experiences of failure on the international marathon stage and how she used these experiences to propel her to further success. Key messages include reframing failures as learning experiences (feedback) and building emotional capital and skills to bounce back after disappointment. Also includes: navigating obstacles, and negative people.
Swimming Through the Glass Ceiling
Chloë shares her trials and tribulations of raising over 1 million dollars in capital and enrolling support to reach success in the trillion dollar international male dominated industry of professional sport. Achieving cut through in an industry which saturates the media with and largely only pays for sporting prowess which glorify mens performance, Chloë shares her drive to get her low profile sport of marathon swimming and womens performance in front of camera and into the minds and hearts of people across the globe.

As one of the greatest ultra-marathon swimmers ever, Chloë McCardel tells a powerful story of endurance and perseverance. Having defied the odds of what humans are capable of achieving, Chloë’s story is brilliantly motivational and encourages us all to be more disciplined in whatever we choose to pursue. She delivers her speeches with a refreshingly positive attitude despite the hardship faced on her path to success. Chloë will inspire and relate to anyone with a goal to achieve.

Presenting to financial and IT industry leaders, including Westpac, Optus, Veda and Intel, Chloë McCardel had a profound impact describing the extraordinary experiences and unfathomable challenges she has faced and overcome in ultra-marathon swimming. With a uniquely engaging ability to incorporate these experiences back to the corporate world, Chloë will both inspire and motivate you to achieve goals beyond what you thought was possible.

There are very few people on the planet genuinely pushing the boundaries of human endeavour. Chloë McCardel is someone who inspires and astounds her audience with tales of achievement and suffering beyond anything most can imagine, all with a smile on her face. She is an Australian icon. 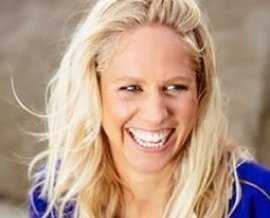