Brendan Fevola had a spectacular career both on and off the field of play. His prodigious talent was recognised from an early age and he was one of three talented AFL prospects featured in a television documentary, ‘The Draft’. It was the beginning of the rather high media profile occupied but not always enjoyed by Fev.

Fev announced his arrival in the big time with an eye-catching 12 goals in a pre-season game on 31 December 1999 – the ‘Millennium Match’. He became a highly effective full-forward, winning the Coleman Medal for leading goalkicker in 2006 and 2009 as well as All-Australian selection three times. Fev’s kicking was indeed his greatest asset; he could roost the ball over 60 metres with a dead-eye-dick accuracy that made opposition fans shudder. Some of his off-field antics, however, made his own fans shudder. Regardless of where you stood, there was always something mesmerising about Fev that has made him a popular ‘wild child’ to this day.

Since retiring from the AFL, Fevola has played one-off matches for several local clubs around the country, drawing record crowds and booting big bags of goals. In 2012, he kicked eighteen goals for New Norfolk in Tasmania to set a new match record and returned the next year, kicking sixteen goals.

Fev speaks on mental health issues surrounding depression and addiction, the importance of getting help and light at end of tunnel etc. Fev is open about his career and off field highs and lows. He shares his story of redemption and he is great at tailoring it for the specific audience.

Fev presents a keynote for corporate and sportsman's night alike followed by a Q & A and doesn’t shy away from the controversial questions but also impresses on the positives, what turned him around and the future. 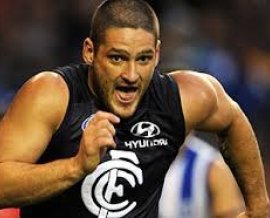