Brad Ness has had the unique opportunity to combine the personal outcome of a work place accident with his studies and continued career as a professional athlete. His role as captain of the Australian Men’s Wheelchair Basketball Team, together with his education, has given him the skills to communicate effectively at all levels.

Brad has travelled the world in his pursuit of excellence with the Australian team as well as living and playing basketball in Italy for more than 10 years.  He uses these opportunities to engage and inspire.

Some of the highlights of Brad’s career to date Include:

Brad is a below the knee amputee as the result of a work place accident that occurred when he was 18.  This has not stopped him from achieving his goals and aspirations. He has developed a passion for motivating people of all ages to achieve their dreams.

Brad has a highly developed awareness of the importance of sound occupational health and safety practices in the workplace and how best to achieve these. He can present these concepts at various levels to meet any specific company requirements and to motivate staff to achieve best practice in the workplace.

Brad brings a fresh perspective to any event, function or seminar.  He will entertain, inspire and motivate so that audiences leave with a new outlook as to what is truly possible with determination and perseverance. 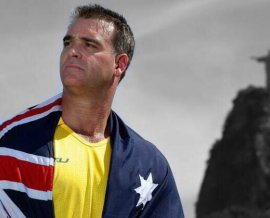