Ben Madgen is the co-captain of the Sydney Kings and a member of the Australian National Basketball Team. He proves that dedication and an unprecedented work ethic can lead to success both nationally and internationally.

After returning home after an impressive US college career, which included playing for Augusta State University for four years, Madgen signed with the Sydney Kings and went on to become the NBL Rookie of the Year.

Ben’s career is full of highlights, including being an NBL All-Star in 2012, NBL’s most improved player in 2013, being named onto the All-NBL First team and coming second in the NBL’s ‘Most Valuable Player’ voting. After playing with the Australian team ‘The Boomers’, Madgen decided he would like to compete internationally.

Recently Ben has signed with the Lithuanian team, the ‘Lietkabelis’, after expressing a desire to play in the European competitions Eurocup or Euroleague.

His presentations showcase his strong work ethic and commitment to the sport, in a way that audiences can relate to. He is able to communicate efficiently with the audience and motivate them to persevere through any challenges they may face. 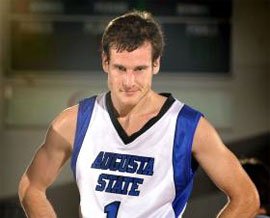