A sports and news presenter, commentator and author

Known as ‘Vossy’, Andrew Voss is a media veteran in rugby league. He is a sport and news presenter, commentator and author. For over 26 years Andrew has worked in all forms of media and has produced, presented and created numerous television programs. Self-motivated and creative, his exceptional skills can be used as an MC, host or presenter, making him perfect for any event.

Beginning his career as a sports reporter at Radio 2UE, Andrew covered swimming, cricket, athletics, surf lifesaving, rugby union, tennis and boxing. In 1994 he joined the Nine Network, working as a top rugby league caller, host of The Sunday Roast and co-host of The Footy Show. In 2009 he acted as host on the network’s Today.

Andrew has covered a variety of sporting events including the Sydney Olympic Games, Melbourne Commonwealth Games and the Vancouver Winter Olympic Games.

Currently a key sports presenter on Radio 2UE, Andrew Voss also commentates for Sky Sports NZ covering all the Warrior’s games and has been picked up by the Kyle and Jackie O Show to present ‘The Sports Report’ every Friday. 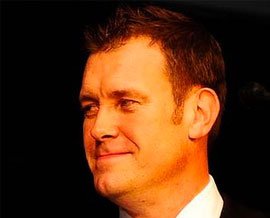