Alastair Lynch is a footballer, author, radio and television commentator and newspaper columnist who enjoys speaking to multitudes of audiences about his experiences. He is acknowledged as one of AFL’s greats, with a career that spanned over 17 years and consisted of 306 elite games.

Alastair’s career began in Tasmania and it was split between two teams, Fitzroy and the Brisbane Bears/Lions, playing for six and eleven years respectively. He was a powerhouse full forward and a one-time fullback.  An all Australian selection in 1993, saw him become the Lion’s co-captain between 1997-2000.

In 1995, he suffered a career threatening illness which was later diagnosed as Chronic Fatigue Syndrome (CFS). Not only did he return to the game after only missing one game of football, but he became an inspiration to those who also suffered from the condition.  Feeling inspired after a potential end to his football career, Alastair brought an entirely different outlook to the sport and played some of the best games as the oldest player in the competition.

In 2000, Lynch decided to stand down as co-captain and allow Michael Voss to do the job solo.

In three consecutive years, 2001, 2002 and 2003, Alastair was a key member in taking the Brisbane Lions to victory in the Premiership. This performance took the Brisbane Lions into the AFL history books and they were regarded as the best team of all-time.

Alastair became the 23rd player in AFL history to kick 600 goals, the 43rd player and the 1st Tasmanian to play in 300 AFL games, a successful finish to his career in 2004. He also ranks equal 5th in all-time AFL finals goals.

In 2005, Lynch authored a biography, titled ‘Taking Nothing for granted’, detailing his fight against CFS and his successful football career. He is now a partner in a Brisbane-based sports marketing and athlete management company, Australia’s newest range of football boots ‘Nomis’, and is also a passionate ambassador of AFL Queensland.

Speaking to the audience about overcoming challenges and staying focussed, Alastair Lynch can assist any organisation and inspire every individual in the room.

Would you please extend my sincere thanks to Alastair for generously giving up his time to speak at our conference. I know that our people really appreciated hearing his thoughts, as did I. His messages with respect to Effective Teamwork were relevant. The room was captivated, Lynchy was very engaging. The group has said he was the best key note address in years. 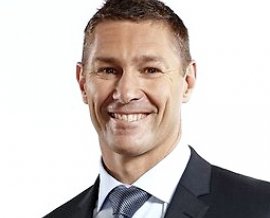