Country Music Singers and sisters Brooke, Sam and Mollie McClymont have taken the world by storm

Since joining forces six years ago, sisters Brooke, Sam and Mollie McClymont have taken the country music world by storm. With their exquisite three-part harmonies, soaring vocals and stunning onstage presence, it’s not surprising that The McClymonts have become the hottest recording and touring act in Australian country music and are fast becoming the talk of the industry in the U.S.

2010 was an amazing year for The McClymonts. In January, they released their sophomore album, Wrapped Up Good, in Australia, achieved Gold sales in ten weeks, and entered the ARIA (Australian Recording Industry Association) Top 100 Chart at #2 behind Susan Boyle, and #1 on the ARIA Country Chart. The first four singles from the album, “Kick It Up,” “Wrapped Up Good,” “Hearts on Fire,” and “A Women Is A Flame,” all went to #1 on the Country Music Charts in Australia. 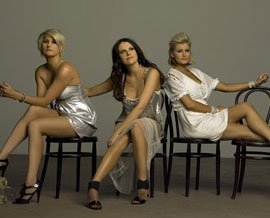