Popular Artist and industry stayer with hits such as You Make Me Feel Like Dancing, I Love You Just The Way You Are

Hit-makers come and go in the fickle world of popular music, but Leo Sayer is a stayer, a powerhouse performer who is still captivating audiences globally after 40 years.

It was in 1971 when Gerard Sayer made the decision to leave his career in commercial art and seriously follow his passion into the world of music and songwriting. His manager’s wife thought he looked like a lion with his incredible mane of curly hair. It was that moment that Gerard became Leo – Leo the lion – Leo Sayer.

Leo Sayer has sold millions of albums around the world and has had more than 20 worldwide top ten hits during his career, many of these self-penned, and he continues to entertain audiences with an amazing live show featuring his uniquely powerful and recognisable voice. Since his first tour down under in the early ‘70s, Leo has fallen in love with Australia, and in 2009 became an Australian citizen.

Still celebrating four decades in the music business Leo will be touring with his all star Australian band throughout 2012, taking his musical party around Australia, Asia and New Zealand. Plans are also underway for tours of England and Europe later in the year. This year’s show features all the hits that have encompassed Leo’s forty year journey. A journey that has seen him fill stadiums and festivals around the globe in concert, collect a Grammy and numerous other record awards, and ride a wonderful roller coaster of career highs and lows in the crazy world of the music industry. Leo has come out of it all, a survivor, smiling with energy and enthusiasm to burn.

Leo Sayer is truly an amazing character. Some say one of the greatest pop voices of our time. His songs are played constantly in all corners of the globe on a daily basis. At 63 years of age, and with no signs of slowing down, his voice is as strong as it has ever been and his creativity is constantly flowing, fuelled by his boyish enthusiasm and love for all kinds of music, and the great art of songwriting. At home he is always working in his studio, recording and writing new songs for future products.

Leo Sayer in Concert features all his hits including You Make Me Feel Like Dancing, Thunder In My Heart, When I Need You, Long Tall Glasses, Orchard Road, More Than I Can Say, One Man Band and many more. Songs that captivated a generation around the world and had Australians glued to their sets each week on Countdown. 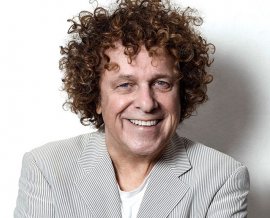