Jimmy Barnes is a bit of everything for everyone. A rhythm and blues man, soul man, front man, father, brother, son, grandfather, friend…hero. But to his army of fans, he will always be a rock singer. Indeed, the most recognisable rock singer this country has produced. With his suit neatly packed away, ‘Barnesy’ has slipped back into some denim and a tee with no alterations required. He’s stomping around like a caged warrior and letting rip with a new album titled Rage & Ruin, a collection of songs that rock in all the right places or roll smoothly with a couple of ballads gently tugging at the heartstrings.

So where does all the rage and ruin come from? Barnesy’s “book of life”, that’s where, and he means that quite literally. “One of the album’s songs is called I’ve Seen It All (Rage & Ruin), which starts with the line, ‘As I look back on my days of rage and ruin…’. And basically most of the lyrics on this album came from a book I’ve had all my life which has lyrics, phrases and notes I’ve penned over the years from when I’d get inspired to write something, Barnes explains. “A lot of the lyrics come from that book, which is mainly from around the time I was in my own rage and ruin, when I was hitting it pretty hard, drinking hard etc.” But with time comes wisdom, and Barnes has been able to look back on that material with a new angle and much clearer perspective. “It was about looking back on my days of rage and ruin, but having the benefit of 20-20 hindsight to get through it,” he explains. “So although the lyrics are fairly dark and meaningful, they’re also very positive. That’s the crux of what this whole album is about.”

Barnes headed for Los Angeles last year and recorded The Rhythm And The Blues, but what many don’t realise is that that album was a byproduct of the real reason why he was in the US – to garner some inspiration and write a rock album that would become Rage & Ruin. In the process, Barnes was able to draw on many influences, team up with outstanding talents and also hit the recording studio with his old friend Don Gehman, the American production guru responsible for the “soul” albums and Two Fires back in the 1990s. While there, Barnes also joined forces with some talented co-writers from different ends of the music spectrum. The first being Mike Daly, a guitar slinger from Ryan Adams’ band Whiskeytown – “an excellent young guy and writer from LA” – and his son Jackie’s former teacher at Berklee College Of Music in Boston, Mark Simos – “an amazing bluegrass fiddle and guitar player” who has written for Alison Krauss.

All camps gelled, and both those talents followed Barnes back to Australia to set about helping the legend rocker construct the material on Rage & Ruin. Throw into the equation accomplished and globally recognised LA session players and the result in the recording studio was nothing short of dynamite. Players included guitarist Tim Pierce (Bruce Springsteen, Bon Jovi, Patti Smith), drummer Kenny Aronoff (John Mellencamp, John Fogerty), bassman Reggie McBride (Stevie Wonder, Taj Mahal) and pianist Mike Thompson (The Eagles). And ever the perfectionist, Barnes says it was important to also inject his “own flavour” into the album with his own live band regulars such as You Am I axeman Davey Lane and drummer/percussionist Jackie Barnes, his son, as well as members of his slick backing vocalist troupe, including daughter EJ Barnes and Ceci Herbert. For fans pining for the return of a Barnesy rock record, the wait is over

From addictive mid tempo groovers like God Or Money and Turn It Around to fired up raw, rockin’ stompers such as first single Before The Devil Knows You’re Dead and irresistible energy of Can’t Do It Again, there’s a mixed bag of goodies for everyone. If it’s a little tenderness you desire, fall under the spell of Love Can Break The Hardest Heart, and take a trip down memory lane amid the folk-charged charms of Largs Pier as Barnes reflects on his Cold Chisel days and a special Adelaide venue of yesteryear that remains dear to his heart. 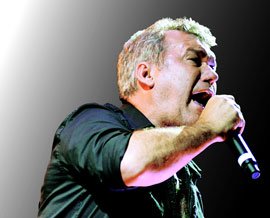