Known for his powerhouse vocals, and musical diversity

James Johnston has had a career as successful as it is diverse. At 25 James has performed on some of the biggest stages and toured throughout the world sharing his craft. 2009 saw James compete in the Hit show Australian Idol finishing 3rd.

After Australian Idol, James toured the country sharing his talents, accomplishing much along the way including fronting a 50 piece orchestra performing swing in front of 10,000 people at the Newcastle Entertainment Center as part of the TV show Starstruck and compering the show in 2010 and 2011.

He performed over 1000 headline shows with his most notable being the 50 gigs in 50 days tour around Australia supporting the ACMF and performing at the Sydney Opera House alongside Michael Bublé.

James has also performed both nationally and internationally at conferences, gala dinners, festivals, charity fundraisers, awards nights and many more including The Lord Mayors Carols and the Gold Coast Indy 600.

Known for his  powerhouse vocals and musical diversity, James’s passion captures audience around the world. James can perform in a wide variety of styles from intimate easy listening solo acoustic, to upbeat solo where he can create a full band sound with just one guitar. James can also be backed by acclaimed Redtie Band with line ups from 2 – 7 piece James can cater to any size event.

As a solo performer or as part of a larger band James is highly proficient in the following musical styles: 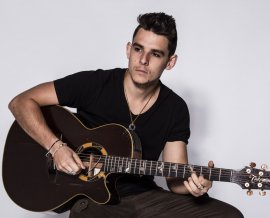