Casey Donovan – the girl with the powerhouse voice - was the youngest winner on Australian Idol, taking the title in 2004, when she was just sixteen.  In the thirteen years since then, Casey has experienced, endured and still managed to entertain the nation. During this time Donovan has won multiple awards including an ARIA #1 for Listen with Your Heart and Deadly Awards for Most Promising New Talent, Best Album and Best Single. Casey Donovan is one of Australia’s most loved Indigenous artists.

After starring on I’m a Celebrity… Get Me Out of Here, Casey proved she still has the soulful, powerful voice that shot her to fame.  Singing songs that she has written as well as impromptu ditties, she had her jungle cast mates mesmerised by her haunting voice. Casey managed to be crowned as the first Queen of the Jungle, donating her winnings to the Starlight Foundation.

After taking a break from music, Donovan returned to the spotlight with Big, Beautiful & Sexy, garnering her more fans.  Casey toured this show and performed to sell-out crowds around the nation, including; Brisbane Festival, The Rocks, Adelaide Festival, Yabun Festival, Darwin Festival and Tandanya National Aboriginal Cultural Institute’s Spirit Festival.  Donovan supported Cyndi Lauper on a national tour and has also headlined and starred in her own Mama Cass tribute concerts.

Casey successfully transitioned to theatre, initially under the guidance of Rhoda Roberts when she made her debut appearance at the Brisbane Festival in “Miracle in Brisbane”.  Donovan has appeared in numerous productions and received the Best Actress Award at the 4th Deagu International Music Festival Awards in South Korea.  Casey was also nominated for Best Performance by an Actress in a Musical and Best Newcomer at the Sydney Theatre Awards.

Donovan has furthered her television career with appearances on Sunrise, The Morning Show, Spicks and Specks, Rove Live, The Today Show and Yarramundi Kids.  Casey has hosted the Deadly Awards and has her own music program, Fusion on SBS/NITV.

In 2014, Donovan released her first book, an autobiography titled, Big, Beautiful and Sexy (New Holland Publishers) and has since moved into the plus size fashion market.  Casey has emceed Melbourne Fashion Week for the Curve Couture Roadshow and performed in Paris for the Pulp Fashion Week. 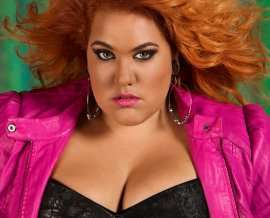