Jessica Fox is an Australian Olympic Champion Slalom Canoeist. At only 27 years old, she is the greatest of all time in her sport.

Jessica’s mother, Myriam, raced for France and won a K1 bronze medal in the Atlanta 1996 Olympics, and her father Richard raced for Great Britain and was a five-time K1 World Champion - Jessica was quick to follow in suit. Coached by her Mum, Jessica joined her first junior national team at age 15; she went on to win four junior World Champion crowns, eight U-23 world titles and a Youth Olympic Gold medal.

During this time, she managed to parallel her sporting achievements with remarkable academic excellence; she finished high school with an ATAR of 99.1 and was the dux of Blaxland High School. Soon after, Jessica competed at the London 2012 Olympics winning a silver medal in K1.

2014 saw Jessica return to the Youth Olympics as a Young Ambassador for Australia, mentoring 100 young athletes. She has since been involved as a contributor to the YOG and IOC movement at various forums and meetings in Switzerland. In 2016, Jessica represented Australia at the Rio Olympic Games winning a bronze in K1, her second Olympic medal.

2018 was an enormous year for Jessica; she won two world titles, eight World Cup gold medals and she was the first person to go through an entire paddling World Cup season undefeated in the C1 event. At the same time, she also completed her BSocSc (Psych). As a result, Jessica was awarded 2018 Sportswoman of the Year at the World Paddle Awards.

​In the 2019 season, Jessica continued to dominate the sport. She won gold in the C1 category at the Australian Open, as well taking out the overall World Cup series crown for both C1 and K1 events.

At Tokyo 2021, Jessica qualified first for the final, recording a time of 110.59 seconds. In the final, without incurring a single time penalty, Jessica delivered a technically perfect run and finished three seconds clear to grab a historic C1 gold in what has been described as one of Australia’s greatest ever Olympic performances. Her father Richard commentated the race live on TV.

After the Tokyo Games, Jessica went on to compete in the remainder of the World Cup season, as well as the World Championships in Slovakia. Jessica secured the overall World Cup title in K1 and finished the 2021 season winning gold in the new multi-race Extreme Slalom K1 event - her eighth individual world championship title. With three years until Paris 2024, Jessica hopes to claim the ever-elusive K1 Gold.

She has shared her inspiring story at presentation nights, local and national business functions and to over 20,000 school children in NSW and Victoria. She presented keynote speeches at major events such as the Opening Ceremony of the 2013 Youth Olympic Festival, and Halogen National Young Leaders Day and has shared her story as a motivational speaker for various businesses such as Westpac and Young President’s Organisation.

Jessica is an advocate for women in sport and a firm believer in balance of sport and education. Her hard work and determination have proven inspirational to young children and to businesspeople around the world; a true testament to her strength of character and her drive 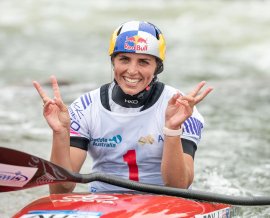