One of the world’s most colourful Olympic Champions, Steven Bradbury is one of Australia's most in demand keynote speakers. Steven will soon join the cast of Channel Ten's Survivor: Champions vs Contenders.

Steven Bradbury created history when he won Australia and the Southern Hemisphere’s first Winter Olympic Gold Medal. Steve won fans the world over for the honesty and humility he showed after the win. He saw the victory as reward not for one race, but for training 7 days a week for 12 years that included more than his share of misfortune.

A race accident in 1994 led him to being impaled on a rivals skate, creating a cut in his leg so extensive he lost 4 litres of blood on the ice and required 111 stitches. He was lucky to survive. A training mishap in the year 2000 broke his neck, but after 6 weeks in a halo brace Steven Bradbury again fought his way back. 18 months later that same neck was supporting an Olympic Gold Medal!

Some people have described Steve’s victory as lucky, however winning Olympic Gold took a lot more than just luck. Just like as in business, strategy and planning were key ingredients in Steve’s success.

Transitioning from being an expert speed skater to a skilled motivational speaker has been an exciting journey for Steve. Over the last 10 years he has presented at over 650 conferences and events in 14 countries and receives wonderful feedback from his clients. Steve loves the adrenaline before going onstage and is proud that his strategies for success in business and in life are able to inspire and benefit so many people. Passion, perseverance and teamwork are what have gotten Steven to where he is today and he really enjoys the opportunity to motivate and assist his audiences to achieve their own goals.

Steve is also an experienced MC and conference facilitator, and he can even incorporate stand-up comedy. Steve doesn’t call himself a comedian but seriously is there anyone on the planet better known for standing up? He is professional, down to earth and after his presentation is over Steve always takes the time to mingle with the audience. Steve loves to work with clients before the event to tailor his presentation to each specific clients need; he’s a great guy, has an incredible product and comes with zero BS.

Steve’s warm friendly nature, down to earth manner and use of humour make his a perfect choice for your next event. The Bradbury story is one of the true Aussie battler who overcomes much adversity to achieve the ultimate goal.

As well as being entertained and inspired your audience will be left with a lasting impression that much of the prize is in the journey and that success takes passion, persistence and teamwork. Steve was the Winner of ‘The Don Award’ – Australia’s best sporting performance 2002 and in 2007 awarded an Order of Australia Medal (OAM) – services to Australian Sport.

Last Man Standing
With an incredible Gold Medal win, Steven shares his experiences with his audiences in both the sporting and business worlds. He shows audiences values, principles and the universal lessons of sport that can help them strive for excellence. Steven encourages all individuals to believe in the preparation, define success and value the process.

I was thrilled in the manner to which the evening went and the feedback we received from all was outstanding. Thought you would like to know that the team unanimously rated you as the best guest presenter / speaker we have experienced in the last 7 years. You have a terrific story that will resonate for a long, long time. Thanks again.

You were the bomb!!!! Everyone loved it and the feedback was incredible. We had heard how good you were but you absolutely over-delivered. A tremendous day!

I recently had Steve speak at one of our events. This was the third time and once again we have had glowing reports from our guests. He is intelligent, witty, entertaining and inspiring. One of the best speakers you can get and he delivers every time. Cant wait to have Steve back again for future events.

Steven was not at all what was expected. After hearing him discuss the history, challenges, training and other obstacles he overcame the whole story blew us away. He was the absolute highlight of our meeting and the team are still raving about him. He really put a different perspective/spin on things and many of us had ah-ha moments. 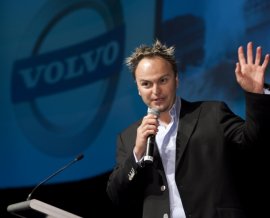