Good Riddance: How to Make Hard Choices Easy for a Change

Stacey Currie is a keynote speaker, successful businesswoman, mother of five and inspiration to thousands of people who have adopted her life lessons. However, it is as a motivational speaker that Stacey is best known. Using her street smart wisdom, Stacey lives by the philosophy (and helps others do the same) that to be more, you need less. For the past 5 years, her keynote speech Good Riddance: How to Make Hard Choices Easy for a Change has captivated audiences across Australia

By any standard, Stacey should be living on the streets, in jail, on drugs or dead. She ticks all the boxes when it comes to risk factors. She had an absent mum, was bought up in housing commission and experienced child sexual abuse. By 14, she was living in a shed. By 15, she was pregnant. By 19, she had 2 babies and was homeless. By 21, Stacey had 3 kids and was living in a violent relationship.

Remarkably, Stacey now has not only survived to tell the tale but managed to defy the odds by using her street smart wisdom to thrive, and help others from all walks of life do so too. In fact, the self-described ‘rough-around-the-edges chick’ often pinches herself when rubbing shoulders with everyone from those in rags to those in riches.

Sharing the stage with countless thought leaders, Stacey has also appeared on TV shows such as the Today Show, 7.30 Report and 60 Minutes to share her againstthe-odds life story. She has featured in many newspapers and magazines such as BRW, The Age and The Herald Sun.

As the co-founder of a million-dollar printing business, her tenacity and commitment have seen her nominated for several business awards. As a qualified leadership coach and mentor, Stacey is known for her rawness, honesty and compassion.

Good Riddance: Make Change Easy
When life is filled with chaos or crisis, a future based framework may not be very useful. You might have no idea what a better life looks like, so what exactly do you aim for? Or maybe you are overwhelmed trying to cope with your current scenario. The great news is that change does not have to be something that happens when you are in crisis. It can be made consciously and easily once you know how, without spending thousands of dollars on therapy or self help programs. Stacey teaches audiences how to work backward to eliminate the things you do not want, how to abandon habitual patterns and start taking responsibility for your life, as well as simple ways to make conscious positive choices. 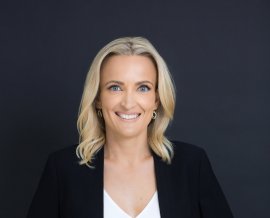