After achieving a number of personal goals, Rod Macqueen is a motivational speaker who can inspire you to achieve yours!

Rod Macqueen moves effortlessly through the worlds of sport and business. He is recognised and respected for his unusual yet effective mix of skills. A lateral thinker and innovator, he has demonstrated throughout his life an ability to unite people to a common cause and create an environment to help them realise their potential to achieve maximum success.

Rod coached the Waratahs to an undefeated year in 1991 and was instrumental in the development of the Brumbies playing structure and culture. However, he is best known as the coach of the 1999 World Cup winning Wallabies. During his time as Australian Rugby Coach, the Wallabies held every championship trophy available to them including the Bledisloe Cup, Tri Nations and the Tom Richards Cup, achieving an astonishing 81 per cent winning ratio.

As a sportsman in his own right, Rod excelled at the highest level in both surfboat rowing and rugby and demonstrated the leadership skills for which he is renowned.

A commercial artist by trade, Rod is Chairman of Advantage Line, a company he started in 1991 and transformed into a multi-million dollar point-of-sale & merchandising business. In addition, he is on the board of several major corporations and consults to multi-national companies. Rod is also a member of the IRB’s Rugby Committee.

In 2001 Rod co-authored his book “One Step Ahead” which became a best seller both in the sport and business sector. During the same year his success as National Coach was acknowledged by the IRB when awarded the “International Coach of the Year”.

In 2002 the Federal Government appointed Rod as a Business Ambassador/International Patron to the Rugby Business Club for the 2003 Rugby World Cup.

In the 2003 Australia Day Honours List Rod was awarded with a Member of the Order of Australia.

Offering insight into how specific goals can be reached with the resources at hand, Rod speaks about the importance of linking organisational skills with lateral thinking, discipline, teamwork, the importance of family values, pride in achievement and keeping a good sense of humour.

With a wealth of anecdotes, Rod is a much sought after keynote speaker who motivates and inspires audiences to achieve their goals. 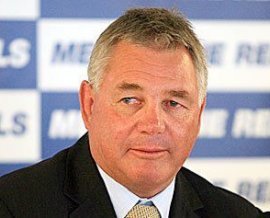