Known as Australia’s greatest Marathon runner, Robert de Castella has been setting records since 1981. He is a fervent speaker whose inspirational words are aimed to assist and inspire individuals across the globe.

De Castella has represented the nation at four Olympics, finishing 5th, 8th, 10th and 26th. He is best known for his efforts at the Brisbane Commonwealth Games, when he came from over a minute back to catch, duel and eventually beat Tanzanian champion Jumalkanga. His dominance resulted in him being voted World Best marathoner of the 1980’s decade.

Robert was voted Australian of the Year in 1983 and honoured with becoming a Member of the Most Excellent Order of the British Empire. Three years later he was inducted into the Australian Sporting Hall of Fame and in 1990 he was named World Marathon Runner of the Decade by Track and Field News.

In the early 1990’s Robert was Director of the Australian Institute of Sport (AIS) for five years, and repositioned the AIS as a centre of excellence after drugs and sports debacle in the late 80’s. He was also involved in the formation of the elite sports system being utilised today by our Olympic athletes and teams.

In 1995, de Castella established SmartStart for Kids, a not-for-profit organisation that works through schools nationally and encourages children to be healthy and live an active lifestyle. It has a specific target on the escalating levels of obesity, poor nutrition and inactivity. The program has resulted in large improvements in the wellbeing of children as well as produced valuable reports and follow-up services students, parents, schools and governments can access.

Currently, Robert is Director of the Indigenous Marathon project which uses the marathon to change lives, aim to promote health lifestyles throughout indigenous communities lowering the incidence of diseases and to create indigenous role models to inspire communities nationally.

Robert de Castella is an inspirational man whose determination and frivolous efforts saw him become a world champion. He is able to converse with any audience and give them the motivation required to achieve any goal they set. 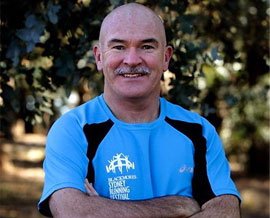