Known as New Zealand’s only gold medallist at the Sydney 2000 Olympic Games, Rob Waddell has a long list of achievements in both the sporting and business industries. He uses specific management and planning skills which he is willing to share with audiences, improving their productivity and performance.

In 1995, Rob was a novice sculler and his skills as a rower led him to become the youngest person ever to win the single sculls title at the New Zealand Championships. This triumph brought his impressive skills to the forefront of the New Zealand rowing scene. Over the next two years, he competed and won the World Championships in both Canada and Germany, breaking several records as he did so. In 2000, his rowing career was topped off with a gold medal at the Sydney Olympics.

Since 2002, Rob has been a part of three American Cup Sailing teams, which ended in the nerve-wracking performance the Emirates Team New Zealand produced in the final of the American Cup in 2013.

Waddell was the first individual to win the Sportsperson of the Year Supreme Halberg Award for three consecutive years, an incredible feat that only one other person had achieved.

As recognition of both his incredible rowing skills and his humble personality, Rob was given the opportunity to be Chef de Mission of the New Zealand Olympic team, which he graciously accepted, leading them to both the 2014 Commonwealth Games in Glasgow and the 2016 Rio Olympic Games. The important role saw Rob become responsible for setting standards of excellence, overseeing the planning and preparation of management teams and ensuring that the athletes have access to what they need in order to succeed.

Away from the public eye, Waddell has also attained a business degree with honours and is co-owner/manager of a thoroughbred horse business in Cambridge. He is the former chair of the Home of Cycling trust, which is a $30 million sporting centre in Waikato, as well as being a trustee for the Te Awa cycle/walk way along the Waikato River.

Rob Waddell is a passionate speaker who helps audiences realise how preparation, training and determination can help them to achieve any goal. He can speak to a wide range of audiences, showing them his own management and planning skills for them to utilise in both their personal and professional lives. 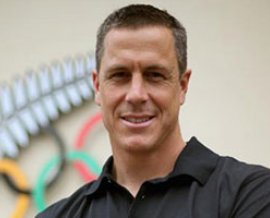