Best described as an adventurous spirit and motivational mastermind, Paul de Gelder has always delved into the unknown as he loves the improvising that must take place during a period of uncertainty. His motto ‘Improvise, Adapt and Overcome’ became something that he lived for.

A young Paratrooper, Paul chased the adrenaline and reached higher into Australia’s defence forces and by 2009 he had become a Navy Clearance Diver.

However, in February of 2009, Paul lost two of his limbs to a shark attack and his career was thrown into jeopardy. Drawing on his personal mantra, Paul fought as hard as he could through the pain and his recovery amazed medical staff.

After his shark attack, Paul continued to instruct Navy divers for three and a half years, before retiring in 2012.

Since then, Paul has travelled the world, becoming a motivational speaker, an ambassador for environmental protection, a keen adventurist and a mentor to school children. Paul has also been heavily involved in military celebrations and speaks passionately at charity events and multimillion dollar organisations around the world.

Paul is well known for being a co-host for Discovery’s ‘Shark Week’ since 2014, but he has also been a guest trainer on ‘Biggest Loser Australia’. He was also involved in the production of a documentary in Africa about anti-poacher’s, further encapsulating his heavy involvement around the environment.

Recently Paul hosted behind the scenes footage for the movie ‘The Shallows’, interviewing Blake Lively in the process.

His courageous and inspirational story resonates with any audience member and leaves them with a mantra to live by which can be adapted to fit any situation.

Improvise. Adapt. Overcome
These three words, the mantra of the Australian Army, resonated with Paul de Gelder the first time he heard them. Paul chased adventure wherever he could find it, from his wild ride as a hoodlum teen to hauling his way up to the elite echelons of the defence forces. But trouble hunted him down in the form of a brutal shark in February 2009. Paul lost two limbs, and his career as a daredevil navy clearance diver was flung into jeopardy. Drawing on everything his eventful life had taught him, Paul left nothing to chance in his recovery. He fought through excruciating pain, smashing challenge after challenge, and amazing the medical staff with his will to succeed. His inspiring story takes never say die to a whole new level.

Paul was the perfect key note speaker for our conference. His amazing story touched the hearts of all our delegates. It also has motivated them personally and professionally. The delegates are still talking about his presentation weeks later. Paul is also an excellent presenter and has loads of charisma to engage the audience. I would definitely recommend him for any event.

Excellent presentation & very down to earth. Paul kept the audience attention throughout – not an easy task. The detail of the operation performed was great. His motivation is amazing. Lots of great feedback from the audience - they all enjoyed Paul’s presentation

Paul was a standout keynote speaker at our conference. He used his story powerfully to communicate the key messages aligned to the focus of our conference. More importantly, it was obvious he was aware of his audience and successfully related well with them. It was great to see him interact with the audience after his talk. Quite a lot of speakers leave once they have completed their talk but he stuck around and we couldn’t been more grateful. Paul is a great guy and I sincerely recommend him. 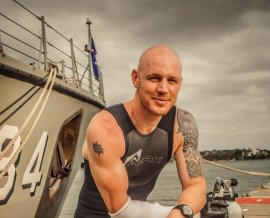