Michael Milton is an inspirational and motivational man who encourages every individual to set and achieve their goals. He works hard to break and set records regardless of obstacles that may stand in his way.

In 2003, Michael was looking for a different sport to try so he decided to have a go at speed skiing.  Atop one of the steepest slopes globally, he clocked over 193km/hr which smashed the 16-year-old world record and made him the fastest skier with a disability.

In March of 2006, Milton attended the Winter Paralympic Game, which was his fifth Paralympic Games, where he won a silver medal in the downhill even after tougher classification was ordered. His medal tally stands at eleven Paralympic medals, with six of them being gold, as well as eleven World Championship medals, of which another six are gold.

A month later, Michael became the fastest Australian skier ever after clocking 213.65km/hr, an impressive feat of skill and determination after his continued attempts to better his own score.

Michael then decided to give cycling a go after his impeccable skills of a speed skier shone. He began a six-month long schedule of intensive training, after which he not only won gold in the 3000m Individual Pursuit at the Australian Track Cycling Championships in 2007 but broke the Australian record.

A few months later, Milton was diagnosed with oesophageal cancer which sidelined him from achieving his goal of making the Australian team and compete at the 2008 Beijing Paralympic Games.

Not wanting to give up his dream of competing in Beijing, Michael made an impressive comeback and competed at the 2008 Australian Track Cycling Championships.

12 months after chemotherapy, radiotherapy and major surgery, Michael arrived in Beijing in time for the 2008 Paralympics, his sixth Paralympic games but first as a summer athlete. He competed in three events, the 1km time trial, the 300m individual pursuit on the track and the 60.5km road race.

As well as competing in several Paralympics and World Championships, Milton has raced in the Mark Webber Challenge, the Kokoda Challenge, has climbed Mt Kilimanjaro and trekked Kokoda twice.

He has also competed in two Para triathlon Championships, one in 2012 in New Zealand and one in 2011 in Beijing where he finished fourth.

Speaking to any audience, Michael Milton encourages individuals to overcome challenges they may encounter and ultimately improves the productivity of many workplaces. He can assist in motivating individuals to perform to the best of their ability. 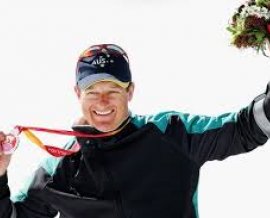