The most successful driver in Australian touring car history

He remains the most successful driver in Australian touring car history surpassing the late Peter Brock’s record of 37 championship round victories.

Like many professional racing drivers, Mark’s career began in Karts in 1981 before progressing to race cars in 1984. He was just 17.

Other than his involvement with HRT, he has a busy schedule that includes being part of HSV’s Product Development Committee as well as being involved with track design and safety.
Skaife announced his retirement from full-time racing in 2008 but continues to remain a dominant figure with HRT and the sport and will continue to drive on a regular basis.

His reduced driving commitments and experience as an accomplished businessman allow Mark to continue his excellent work in the media and as a sought after motivational speaker.

In 2017, Mark was inducted into the Motor Sport Hall of Fame at the Formula 1 Australian Grand Prix in Melbourne.

Contact us to enquire about the availability of Mark Skaife as a Keynote Motivational Speaker for your event. 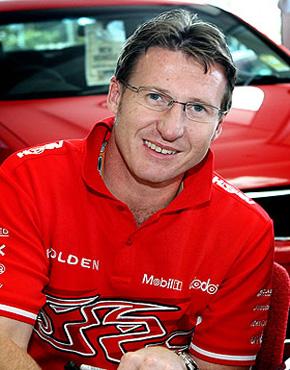