A prominent voice for women's rights across the globe

Named by TIME as one of the 100 Most Influential People in the World, Manal Al-Sharif has an incredible story to tell. She is a prominent voice for women's rights in both the Muslim and Arab world.

Manal is one of the first Saudi women to specialise in the field of Information Sercurity.  An incredibly inspiring and motivating speaker, Manal stands up for those who can't and encourages others to do the same.

In 2002, she began her expansive career, working at ARAMCO which is the largest oil company in the world.

Nine years later, Manal helped to found and lead the #Women2Drive campaign, which challenged the ban on women driving in her country. Whilst driving, Manal was arrested and imprisioned for doing so but was released on the condition she never drive again on Saudi land, never speak about it nor do any interviews.

Brushing off the experience, Manal continued to campaign for #Women2Drive. She also proudly campaigns for #IAmMyOwnGuardian to end male guardianship, #Faraj to help domestic helpers leave jail and #IAmLama which resulted in an anti-domestic violence law being passed in Saudi.

A powerful and professional speaker, she has spoken at TED talks, Harvard, the United Nations, UNESCO, Oslo Freedom Forum, WIRED, Trust Women, The Arab Institute in Paris, the Center for International and Strategic Studies, Clinton Initiative, Women in the World, Dallas World Affairs Council, as well as several others.

In 2017, Manal released her memoir, titled 'Daring to Drive: A Saudi Woman Awakening'. It describes the story of her life, having grown up in one of the most male driven countries in the world.

Her speaking topics include:

Women Empowerment - Manal demonstrates how important it is to acknowledge the women in society and how we can empower them.

Muslim and Arab Women's Rights - looks at the context in which Saudi women are denied their basic rights and what needs to be done in order to reduce the gender gaps.

Social Activism - Manal discusses the methods of activism that can be utilised in a world where culture and technology are forever changing.

Women in Information Security - Manal tells her story about the challenges she faced in order to become a working woman in a mainly male-dominated career field. 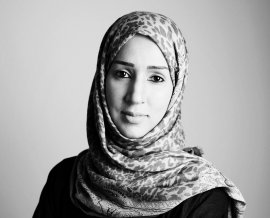