Mal Meninga is an Australian professional rugby league football coach currently in charge of the Kangaroos and formerly the coach of the Queensland State of Origin Team between 2006 and 2015, winning nine out of ten series. Meninga’s career as a player spanned over 15 seasons and he is known for his legendary goal-kicking ability.  With his strong coaching abilities, business skills, drive and motivation, Mal is a great corporate speaker sharing his stories and success.

Rugby League Hall of Fame inductee Mal Meninga is best known by Australians for his formidable power, pace, handling, deadly accuracy and consistency with the boot.

In a career spanning 15 seasons, Mal lists amongst his accomplishments an unprecedented 4 Kangaroo tours including the last 2 as captain, an Australian record 45 test match appearances, a record 38 appearances for Queensland and 5 NRL grand final wins, not to mention scoring the most points of any player in the green and gold jersey and being top point scorer for Queensland in State of Origin history.

Born in Bundaberg Queensland, Mal is an Australian South Sea Islander, a descendant of plantation workers recruited, or ‘blackbirded’ to work in the Queensland sugar industry in the late 19th century. He is now an official spokesperson for the South Sea Islander Community.

Mal made his Brisbane Rugby League premiership first grade debut at the age of 18 with Souths Magpies. He first played for his state in 1979 and the following year helped Queensland win the first ever Rugby League State of Origin match against New South Wales, converting seven goals from seven attempts (Meninga was one of the last players to use the kicking style of punting the end of the football with the toe of the boot). In 1981 he enjoyed premiership success with the Magpies.

Mal became a Saint for the 1984/85 campaign then in 1986 joined the Canberra Raiders where he played all of his New South Wales Rugby League premiership games following many seasons and two (1981 and 1985) premierships with Souths Magpies in the Brisbane Premiership. He led Canberra to their first premiership in 1989 after overcoming the highly fancied Balmain Tigers in the Grand Final. The following year Meninga led the Raiders to another grand final victory against the Penrith Panthers. He was also 1990's top try-scorer and top-point scorer, and was named as Rugby League Week's Player of the Year.

Meninga played his last game for the Canberra Raiders in the 1994 Grand Final where he led his team to victory over the Canterbury Bulldogs and to their third premiership in six years, scoring the last try of the match.  On December 4, 1994 at Béziers, France, he captained Australia to a 74-0 victory over the French, scoring the final try of the game, and of his career.

As a player, Mal was a legendary centre, counted amongst the best players of the 20th century. As a coach, he held the mentor position with the Canberra Raiders then went on to coach the Queensland State of Origin team up to 2011. Mal has coached Queensland to victory in every one of the four series, the only four consecutive State of Origin Series wins ever.

Mal has been awarded the Order of Australia and has also been named in Australia’s rugby league Team of the Century. The main grandstand at Bruce Stadium in Canberra is named the Mal Meninga stand in tribute to his outstanding achievements.

In 2018, Mal was announced to join the prestigious NRL Immortal Club.

NRL great big Mal, was truly captivating and had everyone in the audience wanting more, his story and advice on working through challenges and achieving phenomenal success was inspiring for everyone who saw him. 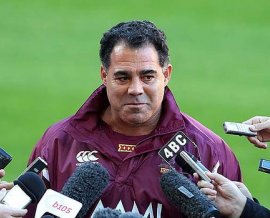