An inspirational man with a story that is sure to captivate

Major Glenn Todhunter is an inspirational man with a story that is sure to captivate any audience.

One September 22nd 1995, Todhunter almost perished after becoming trapped in the wreckage of his aircraft after it crashed from 200ft during a training session. He spent several days on life support in intensive care, during which both of his legs were amputated below the knee to ensure his survival. After spending two months in hospital recovering, another eight months of learning to walk, drive and fly followed.

Major Glenn was told that with his disability, he would never be able to fly for Defence again.

Not content with giving up his passion, Todhunter defied odds and became the first and only amputee aviator to serve the Australian Defence Force, and has flown in both the rotary and fixed wing aircraft for the Australian Army.

As acknowledgement of his courageous achievements, the Australasian Society of Aerospace Medicine granted Glenn with a lifetime honorary membership, the first non-doctor to receive such an award. He has also been featured on the ABC’s Australian Story and was one of four finalists for the 2006 Suncorp Queenslander of the Year.

Now flying for the Royal Flying Doctor Service in Tasmania, Glenn enjoys providing important aeromedical treatment to those in need. He is an advocate for individuals with a disability and trauma victims, encouraging them to never let their past experiences hold them back from fulfilling their passion. He regularly visits schools in order to raise awareness and is an active member of many Disability and Support Groups.

Major Glenn Todhunter’s presentations are inspirational and are sure to resonate with audiences, inspiring them to overcome challenges and to never give up. 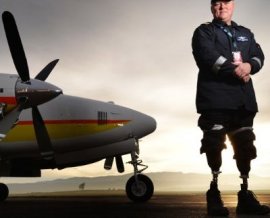