A motivational speaker with unstoppable motivation to succeed!

Lieutenant General Ken Gillespie AC DSC CSM retired as Chief of Australia’s Army in July 2011. This marked the end of an amazing 43 year career. In 1968, then 16 years old, Ken Gillespie joined the Australian Army as an apprentice bricklayer. The career that followed now must rate as one of the most amazing stories of workplace success in the modern era.

The military identified Gillespie as a potential leader at an early stage and he was sent to the Officer Cadet School at Portsea. He went on to graduate as a young officer in 1972 and was commissioned into the corps of the Royal Australian Engineers.

In the years that immediately followed Gillespie held a range of regimental and staff appointments where he performed a number of instructional, administrative and leadership functions, mainly associated with military engineering. During 1986 and 1987 he was the Australian Exchange Instructor at the Royal School of Military Engineering in the United Kingdom.

In 1989 he raised, and then deployed as the second in command of the 2nd Australian Contingent to the United Nations Transition Assistance Group in Namibia. For his work in Nambia he was awarded the Conspicuous Service Medal.

His leadership training was continued through his various postings. In 1985 he attended the Australian Command and Staff College, Queenscliff. In 1991 he was sent to the Australian Joint Services Staff College where he earned a Graduate Diploma in Strategic Studies. In 1998 he was a member of the Royal College of Defence Studies in the United Kingdom. Command and administrative postings followed and promotions in rank were part of the career process.

The culmination was in 2008 when Lieutenant General was made Chief of Army. He was now CEO of a 48,000 people, $6 billion operating budget, multi profession, output focused enterprise. The General conceived, planned and successfully implemented the largest corporate restructure in some 40 years. He was able to maintain high industry outputs in complex security, fiscal and political environments while implementing a challenging capital reinvestment program.

The General led a major, and successful, savings program while delivering each of the organisation’s exacting mission statements plus he led and succeeded in a highly challenging, and public, accountability environment. In the personnel areas General Gillespie implemented major people strategies relating to gender equity, workforce rehabilitation, career and talent management, workforce communication and work place safety. All of these leadership challenges were in an environment where death, injury and grief were present.

For his distinguished service and high order achievements as the Vice Chief of the Defence Force/Chief of Joint Operations and Chief of Army, Lieutenant General Gillespie was advanced to Companion in the Military Division of the Order of Australia in the Australia Day 2011 Honours List.

We had the pleasure of hosting a PwC pearls session and our guest speaker was Lt. General Ken Gillespie, former Chief of Army. The pearls program brings together emerging young leaders in the ASX100 companies to discuss leadership development issues using well known and respected executives in Sydney. Lt. General Gillespie was the ideal choice for this group. He was extremely open, authentic and engaging and it was his honesty and personal reflections that made the discussion so impactful for the audience. Following the discussion, Lt. General Gillespie took the time to answer questions and interact with the guests which was appreciated by all. Everyone found him to be very personable and his insights were not only relevant to the theme but also unique and inspirational. Pearls is part of our commitment to supporting the development of the next generation of Australian leaders by providing a platform for connecting on local, national and global issues. It greatly enriched the program and our participants to have Lt. General Gillespie involved this year. 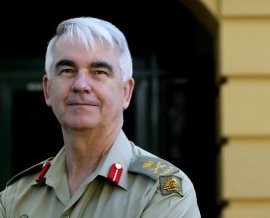