One of the nation's best known and enduring sporting figures

Kevin Sheedy is one of Australia’s best known and enduring sporting figures. As a player and coach of over five decades, Kevin has an unsurpassed record of involvement in 1000 games and eight premierships. In 2008 he received a number of accolades. He has been inducted in to the Australian Football League’s Hall of Fame, made a Legend of the Essendon Football Club and nominated as The Australian Thinker of the Year.

Initially rejected by VFL clubs for being too small or too slow, he started playing for Prahran (VFA) in 1964. After his first premiership with the team, he transferred to Richmond (VFL) in 1967 and played 251 games before his retirement in 1979. He had 3 grand final wins with the Tigers in the years of 1969, 1973 and 1974.

In late 2009 Kevin was appointed as the inaugural coach of Greater Western Sydney. He left in 2013, but his success was clear by the high number of column inches and stories he generated on radio and television as much as by the team’s field performance.

Kevin also had a big role in establishing the AFL Coaches Association where he took the position of president. He received the Advance Australia Award in 1993 and in 1998 was admitted as a Member of the Order of Australia in recognition of his service to sport and the community, especially his work with Aboriginal communities in the northern parts of Australia, encouraging young Aboriginal people to take up the game, and being a vocal supporter of anti-racial vilification laws in the game.

He is the co-author of 7 books including 'Stand Your Ground’, his best-selling memoir, and ‘The 500 Club’, the story of the men who have coached 500 games, which have received acclaimed reviews.

Most recently Kevin was named AFL's 28th official Legend at the annual Hall of Fame function in 2018.

Kevin Sheedy is a colourful and enthusiastic motivational speaker who focuses on positive and lateral thinking, empowerment, workplace leadership and team-building.

Kevin Sheedy is a legend in so many ways, and he is such a fabulous speaker. Everyone at our Mowing Conference loved him. Even the hardest to please. We’d have him again in a heartbeat. 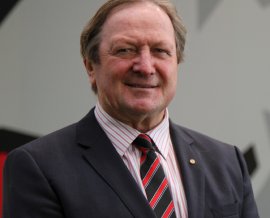