An inspirational speaker whose story engrosses and engages audiences

Kevin Biggar is a inspirational speaker whose story engrosses and engages audiences both in Australia and his native New Zealand.

Starting off as a strategy consultant for The Boston Consulting Group, Kevin decided, along with adventurer Jamie Fitzgerald, to take part in the Trans-Atlantic Rowing Race, considered to be the world’s toughest endurance event.

‘The Oarsome Adventures of a Fat Boy Rower’ tells Kevin’s story of transformation from former fat kid to a world record holder, which was awarded the Sunday Star’s Sports Book of the Year in 2008.

Kevin and Jamie joined forces once again to trek the South Pole, without support, which was portrayed within another book ‘Escape the Pole’. Kevin went on to host ‘First Crossings’, a popular television show in which he and Jamie re-create some first crossings within rugged backgrounds. Kevin starred in another show called ‘Intrepid NZ’ which was released in 2014, where he and Jamie recreate legendary journeys.

Kevin’s professional background saw him employed in strategy, consulting and problem-solving roles within the Treasury and The Boston Consulting Group, along with small businesses and then becoming the CEO of a start-up software company.

His inspirational stories encouraged him to take up motivational speaking, presenting his impressive stories of survival for conferences and corporate events around Australia and New Zealand.

Kevin’s moving stories of adventure, as well as his background within corporate companies, make him appealable to multiple businesses and relatable to everyone within a company, from CEO’s to frontline staff. His presentations include topics such as taking on challenges, improving teamwork and getting the most out of both individuals and teams.

Kevin was brilliant. I have received excellent feedback. Really easy going, personable and very, very inspirational, we were all in awe of his mental strength and determination. The positives that the group took away were that Kevin seemed like just an everyday person, who has overcome the challenges of life and just never gives up. He linked his talk in very well with the audience so was well received.

Thank you so much for your inspirational presentation to Tetra Pak at our conference. The feedback has been tremendous not only recounting the challenges you have overcome during your epic journeys and adventures but the methods and processes utilised to meet milestones, manage risk and most importantly on how to take advantage of teamwork in order to become winners. These, of course, are all things we face in our daily challenges to become the best we can be in business. The way you linked the two together was very clever and it was a great way to close out our meeting.

Well done! Having listened to Kevin speak at our national conference I made immediate arrangements to bring him to Invercargill to address our clients. This proved to be a great success with another wonderful account of some incredible adventures by Kevin. The evening was a great success with a lot of excellent feedback from the large number who attended. 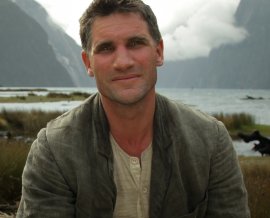