Kelly Cartwright is truly inspirational and a delight to listen to. After losing her leg to cancer at 15 and overcoming the challenge to become a multiple World Record holder, Kelly is sure to light up your function when she shares her amazing story; a story that is best described as triumph over adversity.

Kelly has a impressive and fast-growing list of achievements.  For example, Kelly became the first above-knee amputee woman to climb to the summit of Mt Kilimanjaro in 2009.

Away from the track, Kelly is an ambassador for Make-A-Wish Foundation Australia along with iconic Australian brands Telstra and Qantas. She is also the face of international prosthetics brand Otto Bock, and has recently joined forces with Aussie Bodies to help promote good health for all Australians.  All of this is made possible thanks to support from APC Prosthetics.

Returning from the 2011 World Championships with two gold medals and a new world record in long jump ensured Kelly was going to be under pressure at the 2012 Paralympic Games in London.

2012 was by far Kelly’s biggest year. Drawing on all her training, she rose to the top in Long Jump, setting a new world record; claimed the gold medal; and ran a personal best in the 100m to claim silver in London.

Kelly has visited hundreds of schools across Australia sharing her amazing story and providing inspiration to thousands of students and teachers alike.  Kelly relates brilliantly with students and people from all walks of life.

Her infectious appetite for excellence, her tenacity in overcoming adversity and her love of life is certain to inspire any audience. 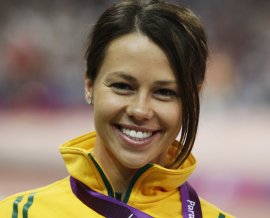