Buchanan has been a successful motivational speaker and his presentations and programs have been received by major industry and businesses around the nation.

John Buchanan is also a published author.  He has published books on coaching and leadership, which have been lauded as entertaining, insightful and relevant to coached and leaders in any field or industry.

Presentations to the corporate sector have been popular and extremely well received.  Companies that have already benefitted from Buchanan’s knowledge and expertise include BHP Billiton, Telstra, HSBC, KPMG Queensland Cotton and many, many more.

A selection of John's speaking topics include:

Control the Controllables
Dealing with the Difficult Personality
How to Develop High Performance Teams
Know Yourself, Know Your Team
Leadership
Pressure is a Myth
The Whole Person Approach 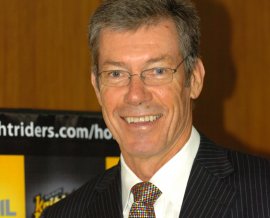