Reclaim your power to embrace anything the universe throws at you

Janine Shepherd is an inspirational speaker and writer whose books have become classics in the survivor genre. A champion cross-country skier in training for the 1988 winter Olympics, Janine’s life changed forever when she was hit by a truck during a bicycle training ride in the Blue Mountains of Australia.

Doctors warned her parents that—even if she somehow miraculously survived her massive injuries—Janine would almost certainly never walk again. After a risky procedure to rebuild her shattered vertebra, and almost six months flat on her back in a hospital spinal ward, Janine came home to heal. With the promise of a career as an elite athlete now gone forever, Janine faced a daunting recovery and an uncertain future.

Struggling to rehabilitate with permanent disabilities, Janine rekindled her defiant spirit in a dramatically improbable way. Sitting outside in her wheelchair one day and watching a small plane fly overhead, she declared, “That’s it! If I can’t walk, I’ll fly!”

Still encased in a full body cast, Janine had to be lifted into an aircraft for her introductory flight lesson. But within a year she had defied the odds and succeeded in gaining her private pilot’s license. Her talent and skill as a pilot subsequently earned Janine a commercial pilot license and ultimately, her flying instructor’s rating. She then decided to learn to fly upside down, and finally, to teach aerobatic flight to other pilots.

Janine went on to succeed not only as a professional pilot but also to attain her University degree, raise three children and author several best-selling books.

In recognition of her service to the community and her tireless efforts in raising awareness for spinal cord research, Janine was awarded the Order of Australia, her nation’s highest honor. She is an ambassador for Spinal Cure Australia and Red Bull’s “Wings for Life” and a contributor to Deepak Chopra’s workshops. Janine’s story has been featured on 60 Minutes, This is Your Life and CNN’s Turning Points with Dr. Sanjay Gupta. Her inspirational and emotional TEDx talk, “A Broken Body Isn’t a Broken Person,” has been viewed almost 2 million times.

She was recently named as an “Architect of Change” in Maria Shriver’s “Sunday Paper” Her latest book, “Defiant: A Memoir” was published for worldwide distribution by SoundsTrue®. 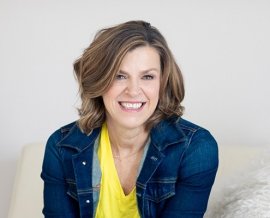