Jacqueline Pascarl is an inspirational leader who fights hard for those without a voice. She holds over 20 years of key executive leadership experience and Board roles both nationally and internationally, working within the Not-For-Profit and humanitarian sector of large and small organisations.

Over 25 years ago, Jacqueline was better known as Princess Yasmin of Malaysia and her two eldest children became the victims of parental abduction. They were held hostage for over fourteen years, during which Jacqueline fought tirelessly to bring them home as well as assisting in the safe and legal repatriation of over 380 abducted children worldwide.

Experience in the CEO role and having worked in the Non-Government Organisation (NGO) and Not-For-Profit (NFP) sector, Jacqueline is widely consulted about media relations and digital communication. She has worked across all media platforms, including radio and television, as well as producing her own documentaries including award-winning Empty Arms - Broken Hearts.

In 1995, Pascarl established ‘Operation Book Power’ in Kenya, aimed at increasing literacy levels in developing countries by building libraries and schools. The program spread throughout Tanzania, Ethiopia and Zimbabwe, before expanding to South Africa where she was special advisor to Nelson Mandela on structuralising his READ Educational Trust. In 1998, Pascarl was appointed Special Ambassador for CARE International and worked as an emergency aid worker in the war-ravaged zones of Bosnia, Kosovo and East Timor.

Jacqueline is recognised internationally as an expert on The Hague Convention and International Parental Child Abduction and has lectured at the US State Department, the Australian Department of Foreign Affairs and Trade, the European Union and the International Congress on Family Law and the Rights of Children.

She also conceived Operational Angel, which aims to assist women and children in war and disaster zones. This work is continued in Australia with multitudes of volunteers assisting during periods of natural disaster and emergency, most recently Queensland’s cyclones and floods. For her efforts in Queensland Jacqueline was awarded the State’s Disaster Hero Medal.

In recognition of her humanitarian work, Pascarl has been bestowed with several awards and titles, including, being nominated four times for Australian of the Year, awarded with the Humanitarian Overseas Service Medal (of which she has two clasps and was the first female recipient), two recognition awards from the National Centre for Missing and Exploited Children USA and the United Nations Special Commendation for the International Year of the Family.

As well as her extensive work in developing countries, Jacqueline sits on several charity boards and has recently been appointed as the first woman National Vice Chair, Australian Defence Force Reserves Support Council and Chair of Clinical Research, Endocrinology at the Royal Children’s Hospital.

Jacqueline Pascarl is a proud advocate for the improvement of developing countries. She is a proud feminist who is sure to inspire and encourage any audience she comes into contact with. 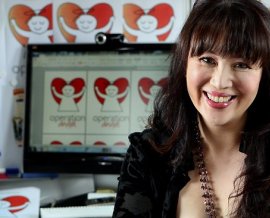