Isa Guha had a playing career spanning a decade for the England Women's Cricket team, and since her retirement she has established herself as a familar face in cricket broadcasting around the world.

At just 17 years old, Isa Guha became the first woman of South Asian origin to represent England in any sport, when she made her international cricket debut in 2002.

​In a playing career that spanned a decade, Isa was part of one of the most successful teams in English sporting history when, in 2009, England won two World Cups, an Ashes and inflicted an ODI series whitewash over Australia. Prior to this, in 2008, Isa was recognised as the ICC Ranked Number One Women’s Bowler in a period where she registered career best Test figures of 9-100 to help England win the Ashes in Australia for the first time since 1934/35. She was also involved in the Ashes winning team in 2005, which helped England regain the Ashes on home soil, after 42 years. At the time of her retirement in April 2012, Isa was positioned as the second highest wicket taker in the all-time England Women’s ODI List and sixth in the world, having been awarded 113 caps.

​Since then, Isa has continued to break boundaries with a career in broadcasting. Her presenting debut during ITV’s Indian Premier League (IPL) coverage in 2011 led to several other opportunities, soon becoming a mainstay with the BBC and Sky Sports (UK), and affiliations with broadcasters globally including Star Sports, Sony Max (India), and ESPN (West Indies, US), and production companies IMG and Sunset & Vine. Regularly finding herself in unchartered territory, Isa became the first woman to commentate on an Indian Test Series for Star Sports, on any global T20 men’s fixture during the Caribbean Premier League (CPL), the highly esteemed Sky Sports Test cricket coverage, as well as Triple M Radio in Australia. As a result, Isa’s profile has grown not only in the UK but extends right across the globe, from South Asia and Australia to the US and the Caribbean, including a main role as part of an all-star cast at Fox Cricket in Australia. In 2020, Isa became the lead presenter and commentator of BBC’s cricket coverage as they acquired the highlights and brought live cricket back to the BBC TV for the first time in 21 years.

​After three years on ITV’s coverage of the IPL, Isa was asked to present ESPN’s 2015 U.S. and Caribbean coverage of the Cricket World Cup in Australia, which was also available digitally across the globe. Over the course of the six-week tournament, Isa gained plenty of experience to help propel her into a regular presenting role with Sky Sports Cricket.

​The last five years, in particular, have been extremely busy. In that time she completed a three year commentary stint on the Caribbean Premier League, followed by her ninth IPL season and fifth on the host broadcast as BCCI/IMG introduced women commentators for the first time. As a presenter, Isa has covered Men’s and Women's internationals for Sky Cricket including the Women’s and Men's World Cup and those special Lords finals in 2017 and 2019.

​Having trained with world class athletes during her cricket career at the English Institute of Sport, and with a keen interest in badminton, hockey, tennis and athletics, Isa set her sights on broadcasting ventures into sports aside from cricket to add to her coverage of the UK Open Darts for ITV, in 2014. An opportunity to present the 2016 Rio Olympics for ESPN Caribbean came at the perfect time for Isa, and she was thrilled to be part of the team in a role that included 8-9 hours/day of live TV presenting across the two weeks of the Games.

​2018 saw the introduction of Isa to the Sky Sports’s Natwest Blast Commentary team, the first time Sky had ever used a female commentator on a men’s game, followed by commentary on the first ever Day/Night Test to be held in England, which led to her joining the highly respected Sky Sports Test commentary team. The following year, it was announced that Isa would join the Fox Sports Cricket Coverage as the main host alongside Adam Gilchrist as they embarked on a new era of cricket broadcast in Australia. In 2020, Isa found herself in a new role fronting the BBC Cricket TV coverage as cricket returned to the channel for the first time in 21 years.

Having finished her thesis last year, Isa is also keen to supplement her commentary and presenting work with production of her own documentary ideas. Experience into this field began with a piece on the India v Pakistan Champions Trophy clash in June for ‘’the One Show’’.

​Not content with TV broadcasting alone, Isa turned her hand to both radio, as one of the first women to summarise as a regular on men’s international fixtures for BBC’s Test Match Special. In 2016, Isa joined Triple M, the Australian FM radio station, as a ball-by-ball commentator and summariser for the Australia v Pakistan Test series and the Ashes in 2018, which was a major success. Her role in ball-by-ball commentary with the BBC TMS subsequently increased and was an integral part of the team during the  Men's World Cup and Ashes in 2019.

​Isa has contributed pieces to Wisden, the Telegraph (UK and Australia), Daily Mail and online to the BBC, Guardian and All Out Cricket. Profile features include Vogue, GQ India, SPORT and Asiana in the UK, and a host of magazines in India including Vogue, Femina, Grazia and the Mandate.

Isa is a regular on the speaking circuit - drawing from her experiences in cricket, media and education to deliver relevant motivational talks to a variety of audiences ranging from sports evenings and lectures to conferences and networking events. Over the years, Isa has branched out into hosting dinners and hospitality days, including the Yorkshire Cricket Awards and the Phil Tufnell VIP Club at the Oval.

​As an Ambassador for various charities, Isa is keen to make an impact through her work with the British Asian Trust and Justice and Care. Affiliations continue with Sporting Equals and the ever- important Cricket United charities and she has previously supported the Dame Kelly Holmes Legacy Trust and Jaguar Academy for Sport.

​Away from the sporting arena, Isa graduated with a 2.1 (Bsc) Hons in Biochemistry at UCL and completed an MPhil in Neuroscience. With a keen desire to make a contribution to science as well as sport, Isa’s research specifically looked at the advancement on neurodegenerative diseases such as Alzheimer’s and dementia.

​Isa will also look to have an influence on cricket and the social cohesion in the U.K on a wider scale having been asked to join the South Asian Strategy Panel for the England and Wales Cricket Board and also as a Trustee of the Berkshire Cricket Foundation who will be enforcing the Spirit of 2012 campaign to engage with local communities.

Isa joined the Professional Cricketers Association in May 2018, at an important time for both the women’s and men’s game and also sits on the Wisden Cricket Editorial Board. 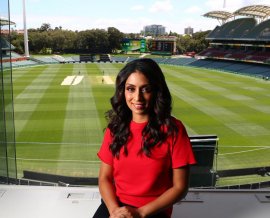