Eric Rush is a motivated individual who has a passion for rugby. His career has spanned many years and has seen him represent New Zealand many times. His presentations are focussed on teamwork and communication and he explores ideas that can assist any company.

A well-known rugby player, Eric started as a flanker for Auckland before transferring to North Harbour where he was switched to the backs. Between 1992 and 1996, Rush played 29 games for the All Blacks including 9 test matches.

Rush is one of the world’s foremost Sevens rugby players, and he has represented New Zealand for 17 years at Sevens as well as captained them to a Gold Medal victory at the 1998 Commonwealth Games in Kuala Lumpur. He also captained the team to win the World Sevens Series title for six consecutive years, win the Sevens World Cup Championship in 2001 as well as a Gold Medal at the 2002 Commonwealth Games in Manchester.

As well as having extensive skills in Rugby Union and Sevens, Eric has previously represented New Zealand in touch rugby and in the U-17 volleyball team as well as winning a light-heavyweight boxing title whilst still in school.

Attaining a Bachelor of Laws Degree, Rush was admitted to the bar as a Barrister and continued for eight years with a focus on corporate legalities. Around five years ago, he ventured into the grocery industry and is now the owner/operator of the Kaikohe New World supermarket in Northland, New Zealand.

Eric Rush’s career has been full of highlights including playing in over 200 first class matches during which he score over 100 tries and representing his country multiple times. His presentations reflect his success and his clever use of anecdotes engross audiences both nationally and internationally. With a key focus on the importance of teamwork, leadership and motivation, Eric can improve the skills of every individual in the room with his entertaining and engaging style. 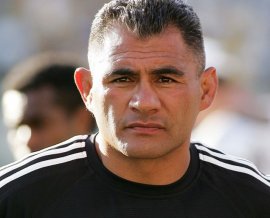