Elle Steele is an award-winning sportswoman and experienced NLP coach and motivational speaker.

Elle’s motivation to play sport at the highest level was overwhelmed by constant injury associated with her physical limitations. Born with a muscle and joint condition called Arthrogryposis Multiplex Congentia that places her in a wheelchair, she has achieved at sport, life and helping others.

Elle Steele is a gifted leader in Melbourne who connects women with their spiritual power. Since coming out of the ‘spiritual closet’ in 2015, Elle’s mission has been to make women’s lives and businesses more magical through uncovering their intuitive strength.

Since hanging up the swimming cap, Elle has worked with organisations including ANZ and Worksafe, heading disability support, change management and mentorship programs and creating meaningful change.

With an inspired suite of programs including her signature workshops, private healings and social media #selfbeliefclub campaigns, Elle is making the world a kinder, more empowered place — one woman at a time.

A confident, professional speaker, Elle has been speaking publicly since she was an elite athlete. Now that she is no longer competing, Elle speaks on various topics and also provides in-house leadership and communication training for staff.

Adaptive Leadership and Communication
Adaptive community leadership programs that propel organisations into a world of better productivity, team cohesion and change management projects that actually work.
Staff Resilience
In todays fast paced work environments, it is essential to build resilience within your staff members and their out teams. Elle runs various types of resilience training including, one on one sessions, wellness programs and educating staff in ways to combat stress in the workplace.
The Paralympics and Disability Acceptance
Born with a rare congenital disability Elle had to overcome her pain of feeling different which often presented itself through anxiety and depression. Her adventures as a Paralympian gave her life meaning, but when she had to retire due to injury, Elle's life became about learning the art of self acceptance and loving her disability. 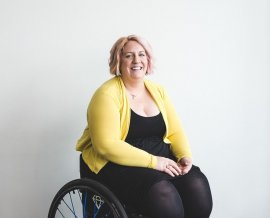