Duncan Free is one of Australia’s most well-known male rowers, participating in four Olympic Games. He won a Bronze medal in the 1996 Atlanta Olympics before going on to win a Gold medal in Beijing’s 2008 Olympics, with his rowing partner Drew Ginn.

Free was a strong contender for the London 2012 Olympics, until he was hit by a car whilst cycling in the Gold Coast in 2011. His body suffered a right femur fracture, which led to stress fractures in his ribs, causing him to retire in 2012.

Andrew Matheson, Rowing Australia’s High Performance Director, praises Duncan as being one of the finest rowers of his generation and as a man full of strong determination and knowledge.

Even though Free couldn’t take part in the 2012 Olympics, he still attended as a mentor and is now committed to helping and encouraging young athletes.

Duncan happily shares his wisdom and experience to any audience, and leaves them feeling inspired and motivated, encouraging them to take up any challenge which may cross their path. 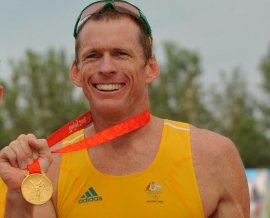