Taking audiences behind the scenes of his extraordinary journey

Don Elgin is the quintessential boy from the bush, entertaining, motivational and an all-round Aussie larrikin; he represented Australia in the athletics at four World Championships, three Paralympic Games, two World Cups and a Commonwealth Games.

Don was raised in the NSW town of Tocumwal. Being born without the lower portion of his left leg was no barrier for this boy who would make his first Australian team at 18 years of age, becoming a World Champion and a staggering 20 years later would represent Australia at the Commonwealth Games.

As a respected voice on sport both on and off the track, Don commentated at the 2006 Commonwealth Games in Melbourne and appeared on Andrew Denton’s ABC TV show Enough Rope. He was the inaugural patron of Disability Professionals Victoria. Community minded he is a former president of Sandringham Athletics Club and former vice President of The Amputee Association of Victoria. Don is a founding board member for the Start Foundation and the inaugural ambassador for New Horizons Club and current board member of Wallara Australia.

A true leader Don was the Australian flag bearer at the 2006 World championships. After competing Don put his leadership skills to work as an Australian Team Manager at the 2011 World Athletics Championships in Christchurch, NZ. The following year Don was a Team manager for the Australian Athletics Team at the 2012 London Paralympic Games before making a successful return to sport to compete at the 2014 Glasgow Commonwealth Games.

Away from the sporting arena Don is a highly sort after motivational speaker and facilitator and throughout his career has worked with a vast array of organisations including BHP, Telstra, Australia Post, NAB, Coca-Cola Amatil, Australian Sports Physicians, Victorian Police Force, the Education sector, many not for profits and multiple sporting teams including Hawthorn FC, Western Bulldogs FC and Brisbane Lions FC in the AFL.

Don is an accredited facilitator with the World Sports Academy and is passionate about taking his life experience and many years of working in teams from the sporting arena to the board room to help people achieve a higher level of performance. “As a competitor I was driven to be the best athlete in the world, I now work with organisations all over the world facilitating the Star Leadership program helping them in their pursuit to be the world’s best in their chosen field. The exciting thing about being in pursuit of excellence is the need to be constantly open to learning and challenging yourself, the best teams in the world do this”.

Don is living proof that with the right attitude anything is possible, not only has he exceled in elite sport, he established his own boutique management company managing some of Australia’s finest amputee talent, has incredibly walked the Kokoda Track twice and is the author to two books. He creates tailor made powerful presentations based on his real-life experience. Don takes his audience behind the scenes of his extraordinary journey from little bush battler to world-beater.

Don walks the talk and his approach to life has clients walking out with a spring in their step every time. He is upbeat and makes no secret that he is the happiest bloke alive and is very happy to share real life practical strategies to get the most from every day. Don is a master of weaving a client’s message into his presentation and leaves you with no doubt as to why he is a highly sort after motivational speaker and facilitator in Australia and around the world. His message is one for all ages.

Change
How to cope and embrace change as something to look forward to
Gratitude
Learning to appreciate what you have in life and not to focus on the things you do not have
Leadership
Provide examples on how to be a better leader, whether at home or in the office
Motivation
Inspiring your audiences to have a crack and make the most of their opportunities in life.

Don was able to tailor the presentation to address the challenges of a Detective, this was very well received by the students. Very inspirational and highlighted that nothing is impossible. You meet every challenge head on, and you will get success.

Don was very professional and responded well to the brief provided. He had this audience absolutely captivated from the start to the end, he made us laugh but also made us look deep inside ourselves and reflect on our own so-called challenges. As a room full of leaders, I know we were all left inspired by Dons journey and I also know that many of us walked away putting what we believed were our own obstacles into perspective. To anyone thinking of engaging Don to speak to their team, business, school or social event I would highly recommend them to proceed with this. I have seen many great speakers in my career, and I have always taken something away from each of them, but I have taken the most away from Dons inspirational journey. A truly great person and inspirational leader, thanks very much Don

We absolutely loved Don’s presentation, thank you. Participants reported that they really enjoyed the presentation and thought that he was excellent. Don’s story was uplifting and humorous, he had a refreshing knockabout style and was able to impart new wisdom on the topic of having a go in life. No question was too controversial for him to tackle and nothing fazed him. We enjoyed his session immensely. 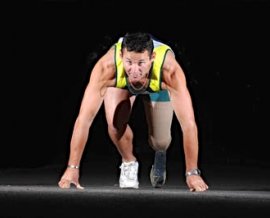