One of the most successful race car drivers in Australia, Dick Johnson AM has become a highly sought after motivational speaker and can motivate his audience to perform to the best of their abilities and push themselves to their limits.

Starting his incredibly successful career in 1964, Dick raced an FJ Holden and won his first race after his second attempt. Five years later, after several seasons of success he was ready to move on to a EH Holden and received support from petrol giant Shell, an association which would last the length of his career.

In 1977, he was backed by Bryan Byrt and made the switch to the Ford camp. He was racing a new Falcon V8 and began his series of attacks in major racing events including the Bathurst Classic. Three years later, Johnson came into full public attention when, whilst leading the Bathurst 1000, a rock that allegedly rolled onto the track from a spectator, caused him to crash out of the race.

His dilemma had almost caused him to stop racing but the public were so moved by his predicament that the began pledging money when Channel 7 desired to assist him in rebuilding his Tru Blu Ford Falcon XD. The switchboards became so jammed due to all the kindness and caught the attention of Edsel Ford, who promised to match the donations dollar-for-dollar. Overall $84,000 was raised which launched Dick Johnson racing and turned Dick into an Australian sporting hero.

Consecutively winning the Australian Touring Car Championship in Bathurst in 1981, 1982 and 1983, Dick Johnson became a household name and was known globally for his racing efforts. In 1987, Dick gave the Ford Sierra Cosworth it’s world debut, under the full sponsorship of Shell.

A year later at the Shell Australian Touring Car Championship, Johnson and his team won eight out of nine races cementing his success as an expert driver. In 1989 he dominated the Shell Series once again and scored his fifth Australian Touring Car Champion title. Johnson then joined fellow racer Bowe, and together they won the Bathurst Classic for a second time and won the Pukekohe 500 in New Zealand.

After dominating in so many seasons, Dick was expected to win several races. Unfortunately, the newer model Nissan cars were no match and lowered Dick’s impressive wins to a small number.

Showing no signs of deterrence and extreme dedication to his sport, Dick came second in both the Winfield Triple Challenge and the Peter Jackson Dash series.

In 1993, when Australia’s all-new V8 Touring Car era began, Dick raced his beloved Falcon V8 and won the Shell Championship. A year later he claimed the top prize of the Tooheys 1000 at Bathurst.

As recognition and appreciation of his services to motorsport and charity organisations, in 1997, Dick Johnson was awarded with a Member of the Order of Australia.

In early 1999, Dick announced that he was retiring from driving.

Dick Johnson is an Australian motor racing legend, whose determination is admirable and who can motivate any individual. His presentations are filled with humour but relay the key messages of determination, goal setting and overcoming adversity. 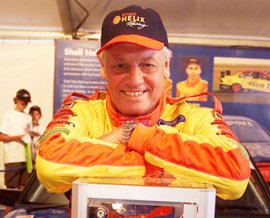