Experiencing a career that spans across multiple industries, David Parkin is an accomplished man who is now working to motivate and inspire any audience he speaks to.

From 1961 to 1974, Parkin played 220 senior games of football with Hawthorn and Subiaco. During that period he captained the Hawks for six years and led them to their second premiership in 1971 before coaching them to a flag in 1978. He was also State Representative in 1965 and 1968.

After successfully coaching Hawthorn, David moved to coaching Carlton and led them to consecutive premierships in 1981 and 1982. It was these incredible victories that titled him as one of the super-coaches of the 1970’s – 1980’s.

Throughout the 1990’s, David continued to coach Carlton and applied innovative techniques, allowing them to set a new record for an unbroken series of AFL winning games which culminated in Carlton being the 1995 Premiers.

In 2000, regardless of the excessive coaching offers and invitations into the corporate sector he received, Parkin’s returned to Hawthorn as Director of Football, where he continued until 2002. In May of the same year he was inducted into the AFL Football Hall of Fame.

His achievements don’t stop at football. David has developed and lectured in the Sports Coaching Degree course at Deakin University and has also lectured at the Victoria College Burwood Camps, State College of Victoria Burwood Campus and Burwood Teachers College. He currently holds a Bachelor of Education from the University of Western Australia.

David is also an avid writer and has written and published several books and articles including ‘Preparing the Australian Footballer’, ‘Children’s Sport – Equalizing the Opportunity to Play’, ‘Premiership Football’ and ‘Perform or Else’. David has also joined cohorts with Paul Bourke to author two books, ‘Winning With Pumped Up People’ which focuses on how employees and employers can achieve success in an ever-changing marketplace, and ‘What Makes Teams Work’ which includes reasons and lessons of success from some of Australia’s largest and most successful businesses and sports teams. The pair has also recently published a book titled ‘Captain-Coach Leadership’, in which they look at the key elements of success and how employees work harder when they desire to achieve something such as ‘Employee of Choice’ status.

Aside from authoring books and playing football, Parkin is also regularly featured across several radio stations as an AFL commentator, including ABC Radio, Radio 774 and Fox Sport.

David Parkin is one of Australia’s top motivational and inspirational corporate speakers and is often described as powerful and intellectual. He inspires his audience to achieve greatness and rise to greater heights in both their professional and personal life. 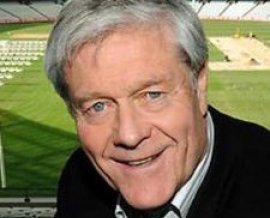