David Foster is able to deliver a presentation that amuses, inspires and entertains any audience.

He has become one of the world champions in woodchopping, winning over one thousand championships.

David's success has been globally documented, having represented Australia since 1980 and captained the nation's team for 21 consecutive years. At the 2003 Sydney Royal Easter Show, he announced his retirement as captain of the team, but continued to represent the contry.

He has won the Australian Axeman of the Year nine times in a row and in 1990 was awarded as Axeman of the Decade. David has also taken out three world records for the sport.

With an inspirational story to tell, David shows audiences how to achieve their dreams and reach the pinnacle of there career. 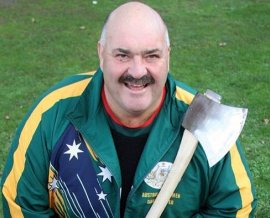