Against all odds - The Beaconsfield Mine Rescue

One phone call changed Darren Flanagan’s life forever and made him a nationally recognised hero. His unwavering persistence and strong endurance ensured the safe return of two trapped miners to their families.

The famous Beaconsfield Mine Rescue is one event that every Australian remembers. On April 25th in 2006, there was a major mine collapse in Beaconsfield, Tasmania and two mine workers, Todd Russell and Brant Webb were trapped. The nation watched in horror as the story unfolded and as tremendous rescue efforts continued for days.

For Darren, it was one of the hardest moments in his career as an explosives expert. He spent five days trying to refine an explosion that would tunnel through the rock but not kill the trapped miners. After 29 hours of nonstop explosions, which left Darren both mentally and physically exhausted, a blast that came within 30 cm of the miners, enabled rescuers to save those trapped, completing one of the hardest rescues in Australian history.

Flanagan retells his emotional story to audiences keeping them engaged, as his determination and grit when faced with adversity is told with his own words. The extreme pressure he must have faced during a period of uncertainty inspires everyone who meets and speaks to Darren.

Darren Flanagan’s presentation are described as passionate and thrilling as well as humorous, which takes audiences through an array of emotions. His presentations are always memorable and his messages of resilience and overcoming challenges, stay with every individual in the audience long after. 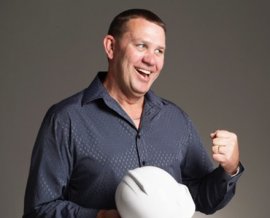